Three horses have been found dead and processed for their meat in just over the span of a few weeks in the Pearland-west Harris County area of Texas.

Between Thursday May 21st  and Friday May 22nd , Tina Amaya on Wayside found her beloved mare Miriam murdered for consumption.

A few weeks later on Wednesday June 10th, Tyler Brockel went out to property his grandfather owns to water and feed the family’s two horses. There he found Sugar tied to tree branch and Goldie dead on the ground, stabbed and processed for her meat. The police said level of the animal cruelty involved was unlike anything they had ever seen in the area.

Most recently, on Monday June 29th, Raymond Breaux checked on his horses on the eastbound feeder road of Beltway 8 near Kirby and found his mare Oreo dead on the ground, processed for her hindquarter and side meat much in the same manner as the other horses. Police say the suspect(s) had cut the fence and knew how to handle horses.

Horse owners are being advised to check their horses and properties. 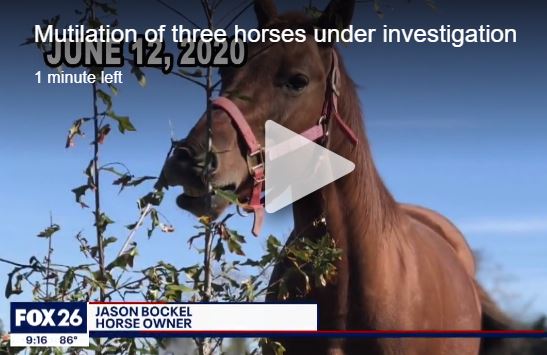 Three horses butchered. Watch the video here.
Stolen Horse International provides news and other resources for free on this website. As a charitable organization we survive on the kindness of people like you. Please consider donating to help fund the organization or purchasing a NetPosse ID for your horse, dog or cat to help protect your beloved animals!
Donate  Buy NetPosse ID