There has been a very disturbing case involving "Ger onimo," an 8-year-old Quarter Horse stolen from Ivonne Rodriguez of Redland, Florida. Although an official report had not been filed, Stolen Horse International had been alerted to the theft of this horse and was one of the reasons we issued a IDAHO ALERT theft warning this past weekend for that area.

The Paint horse was taken from his pasture, walked to a nearby fi 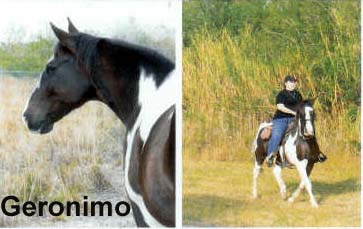 eld, tied to a tree, killed and stripped of the meat on his body. His decapitated carcass was found Thursday, March 5, 2009 not far from his own home. His head was later recovered, which gave the unmistakable true identity of the horse who had suffered in this crime.

This is a horrible ending to a beautiful horse and we, at Stolen Horse International and our volunteer NetPosse members, hurt for the Rodriquez family. But they are not alone.

Law Enforcement officers in the Miami-Dade area find the facts in this case, and other similar cases in Miami and the Palm Beach areas, hard to understand. The slaughter of horses in this manner is not “new” news for me. I have a documentary video lying around here somewhere that shows footage on this very same problem, but in Canada.

In reading the recent news coverage and consulting with news agencies, it seems that the primary focus is on the slaughter of the horses. It is difficult to interpret the whole story behind the killings any way other than to conclude that the horses, on the whole statewide, might be at risk first from horse theft, and second, that horse theft might result in a very tragic ending.

I have been in touch with authorities in the Florida, and I am not ready to point the finger at any single cause for this problem, when in fact, there might be several explanations. Not all of the horses found have had the meat stripped from their bodies. Some have been in various degrees of decomposition.

For now, we're studying all possibilities, and I am urging horse owners and authorities to do the same. To believe that the slaughter of these horses is related only to the closing of the legal slaughter facilities in the United States, at this point, is pre-mature.

At this time, it is anyone’s guess, but I offer conceivable scenarios, presented below based on years of horse theft experience and from the handling of thousands of cases, for your consideration.

Mike Clary, of the South Florida Sun-Sentinel, in a recent article stated, “In October, several horses were among more than 400 animals removed from what Couto called a "slaughterhouse" in southwest Miami-Dade County. The owner of the property was charged with several violations.” [ ]

Even though the American Horse Slaughter Prevention Act closed the doors of the plants in Texas and Illinois, we have heard of “unconfirmed” slaughterhouses like the one mentioned above for years. For an example, we offer this 2004 story in Philadelphia, telling how you could buy pounds of horse meat for a few dollars from a backyard butcher on 47th Street in West Philadelphia.

A Philadelphia news investigating team bought almost 200 pounds of horsemeat with no questions asked in a in a nine month undercover investigation. A member of the investigative team was able to show an undercover humane officer surveillance video of a horse actually being butchered. The story states that horses were killed somewhere else and brought to the downtown slaughterhouse, which was just a garage and boarded-up lot.[ ]

A quote in the news story, from someone living in the neighborhood alleged that some of the elderly residents may have been buying this horsemeat for meals while also stating that the butcher was giving the meat to homeless.

Is it possible this could be happening in Florida? Even though eating horse meat in the United States in not a commonly excepted practice, other cultures are not quite as easily offended when it comes to eating a horse. Can the recession be affecting people so much that they are stealing horses to feed their families, or to sell to others for that purpose?

Perhaps some of the horses found in Florida were tossed out because owners cannot pay a rendering facility to dispose of deceased horses. Perhaps, they just didn’t want to pay the money and took the cheap way out. Both of the above reasons are believed to be related to cases we have handled in the past where a horse carcass has been discovered. Maybe we are seeing more of these cases in this recession from people who might have been able to spend the money in more prosperous years.

Are some of the horses killed as part of a gang initiation or cult ritual? In a few moments of surfing the Internet I found no shortage of articles relating to these types of horse deaths. I received several calls from victims around the country when we posted our IDAHO ALERT about the deaths. Each person re-lived horrible experiences they believed to be related to a cult or gang.

One such caller, whose horse survived, had even seen people dressed in black robes on her property early one morning. Had it not been for the full moon overhead, casting a light on the arena, she might not have her horse today. Out of fear, she eventually moved to another state.

There are many wild animals in the United States, a number of which are located in the state of Florida. We have worked with officials on a case in the past in Florida, where horses were stolen with the express purpose of being fed to wild animals. I am certainly not pointing a finger at legitimate refuges, but where does all that meat come from?

If there is anything positive to come from the deaths of these horses, is that this horrible act has created an awareness that has brought the Florida horse communities together.

After we have debated why these horses have ended up like this, there is one fact that needs not to be overlooked. A number of, if not all of, the horses were possibly stolen.

For 11 years, since my own horse Idaho was stolen, we have been proactive in teaching the public that horse theft occurs more than you know, and for all kinds of reasons. What is going on in Florida now, only touches on a few of the reasons.

Stop the theft and you help stop the killings.

In the News: Another Horse Slaughtered in Florida

Warning for horse owners after another slaughter attempt in Florida.