The Sumter County Sheriff’s Office has announced that it is teaming up with Crimeline and offering a reward for information leading to an arrest of persons involved in the slaughter of horses for meat.

Detectives are looking into similar cases in Central Florida.

Whip a Collier County Quarter Horse, was stolen and then slaughtered for its meat. The butchering was reported in February 2020 in Manatee County. The victim found her horse missing and called the sheriff's office and the horse was eventually found dead in a nearby field. Deputies say it was found in a Golden Gate Estates pasture.

Another case, Jayda, was in Sumter County in December. Tamara Weaver, said her 10-year-old horse, Jayda, was found killed across the street from where the animal had been boarded.

Hot Rod, a 21-year old Paint gelding was found in November of 2019 in a pasture dead, with a broken leg and his hide removed.

Visit Jayda on her webpage on the Stolen Horse International-NetPosse.com website here: https://netposse.com/tag.asp?id=3014 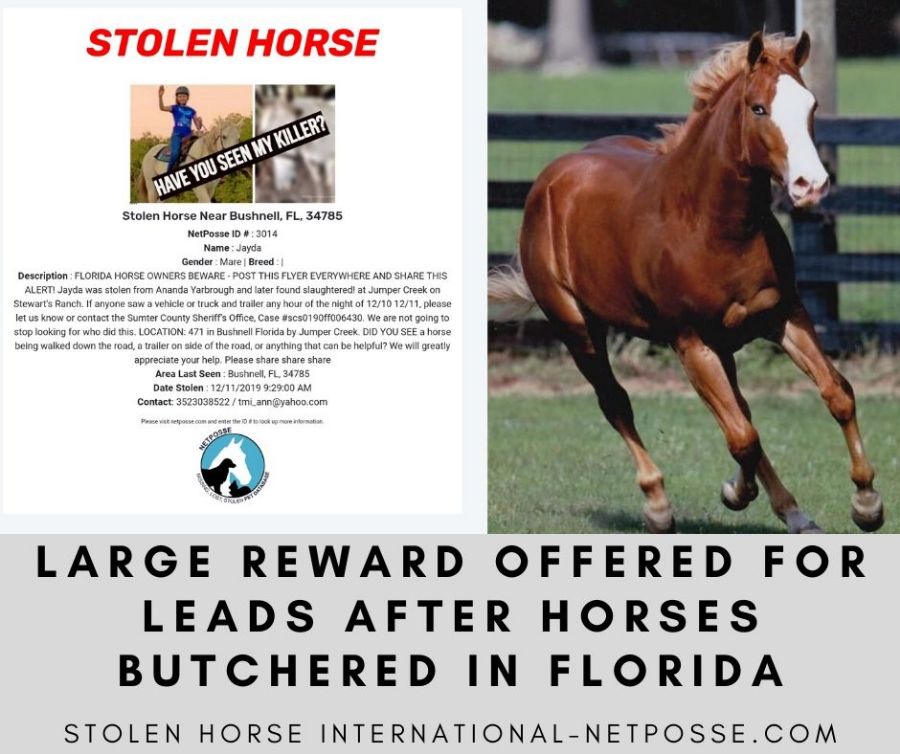 Purchase your equine or pet microchip kit in our NetPosse Store. ID your furry friend today. All proceeds support our victim's services
and educational outreach programs.

How to Nominate Stolen Horse International, Inc on GreatNonprofits