(Shelby, NC, June 28, 2011) -- Stolen horses have now made to the airwaves in the western world by way of The Horse Radio Network's (HRN) radio show, Western Radio Show. 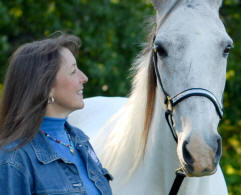 Metcalfe is widely recognized as an idea and innovation guru when it comes to horse protection, farm security, and identification. She has been a driving force behind the success of finding many of the world’s missing horses as she teaches the world how to how to protect theirs.

Metcalfe tells the story of Idaho, the horse stolen from Shelby, NC who is the inspiration behind this successful nonprofit organization on the show. In this rare radio cast, you will meet Metcalfe in a candid (and sometimes humorous) interview and hear her tell her story behind the story you think you know.

“I always dreamed of having a horse. As a child, I even named my dog Trigger because I couldn’t have one. I lived in the city,” says Metcalfe. “I never thought in my wildest dreams that as an adult I would be helping people in the horse world like I do today.”

When her husband Harold’s stolen horse Idaho was recovered after 51-weeks, Metcalfe vowed that no other victim would have to face such a traumatic experience alone. Today, at the nerve center of Stolen Horse International, Inc., NetPosse.com Alerts, similar to Amber Alerts, are sent out by the thousands throughout the world when a horse is missing. Metcalfe sorts through hundreds of e-mails daily, many requesting information or telling their own stories of theft.

Through the efforts of Metcalfe and the NetPosse volunteers, many horses and their owners have been reunited. Metcalfe’s experience plus working with victims every week gives her insight that most horse owners can't understand until the worst happens.

The popular Western Radio Show program, Western Radio Show Episode 59 – The Modern Posse can be heard at www.WesternRadioShow.com  and can also be heard on SmartPhones by following the Listen Live link on the website. You can go to NetPosse.com http://netposse.com/newsviewer.asp?id=436 to find the show.

Who really started selling equine microchips to the public first?

NetPosse Stores has microchips for our dogs too!