Silver, a 25 year old gelding, bumped off his young rider and took off into the hills fully tacked. April Bagdonas, who had cared for Silver in previous years, helped to organize a search posse of cowboys, plane flyovers, drones, 4-wheelers and hikers to search for him.

The day following his disappearance it snowed, covering his tracks and making the search for him a maddening experience. Nevertheless, everyone kept searching. On Tuesday, while a plane kept searching for him overhead and a group of cowboys and cowgirls from Mansfield continued searching for him below on horseback, April spotted Silver up on the top of the ridgeline, just standing quietly, lost.

“I spotted him from the bottom of the mountain when the airplane folks came up to tell us they spotted him,” said April. “We all found him. He was still wearing his tack.” The rescue riders met up with Silver and brought him back down the mountain.

“He’s thinner than he was, but he’s doing okay. Not a scratch on him.”

April and everyone involved with Silver are very grateful to the community for coming together as well as they did and helping to search for him until he was found.

“I’m thankful I can sleep tonight,” she continued. “I might cry myself to sleep but it will be happy tears.” 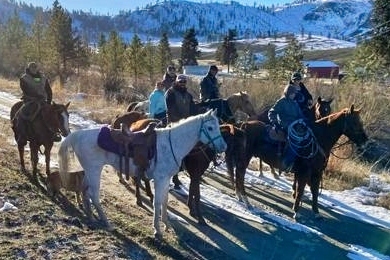 Missing for 10 days, Silvers is home!
Provided photo/April Bagdonas
Stolen Horse International provides news and other resources for free on this website. As a charitable organization we survive on the kindness of people like you. Please consider donating to help fund the organization or purchasing a NetPosse ID for your horse, dog or cat to help protect your beloved animals!
Donate  Buy NetPosse ID

Are You Looking for Lost or Missing Horses/Pets Due to Louisiana Flooding?