PENN COUNTY TOWNSHIP PA (NETPOSSE) -- It is with deep sadness that Stolen Horse International announces that Val, a 14-year-old Haflinger mare that reported missing and assumed stolen on July 30th, died not far from her pasture in Penn Township, Pennsylvania.

Brian Gratzer said that Val was found by a man on Tuesday at the bottom of a 20-foot ravine not far from his property.

Gratzer thinks that his horse may have jumped a fence after being chased by coyotes, who then attacked her.

Gratzer told the Butler Eagle, “She was eaten up,” and stated that she appeared to have been in the ravine for some time.

According to Gratzer, coyotes had not been a problem before even though he hears them yipping at times. A neighbor stated that a pack of predators were seen in a trail camera not far from Gratzer’s farm.

Our hearts go out to Brian, his family, and Val. Rest in peace dear, Val. 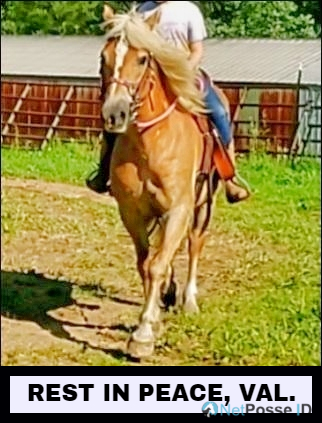