UPDATE!!! HAPPY DANCE TIME! LAW ENFORCEMENT HAS FOUND THE HORSES!! MORE DETAILS TO FOLLOW. Sarah says, "The ncso just released the report so share away and thank the whole community on our behalf!!!"

NAVARRO COUNTY, TX—Tuesday evening on August 25th, 2020, three horses in Kerens were stolen from the home of Jarod and Sarah Block.

A report was filed with local officials, Stolen Horse International / NetPosse, the nation’s lost and found for missing and stolen horses.

The Navarro County Sheriff’s Office is asking for the publics' assistance with a felony theft investigation in locating three stolen horses.  The horses were stolen on Tuesday, August 25th sometime between 8:45 pm and 10:30 pm from the 100 Block of Bella Vista Lane Kerens.

Jarod says in the report, “They were stolen from 2 different pastures and walked through his (alleged thief’s) cut fence.”

According to Jarod Block, the fence was mended after the horses were loaded and hauled from his pasture. A halter, horse poop, and tracks, etc, were found.

Sara Block explains further on her Facebook page, “It seems he cut his fence, walked down our private road for 3/4 mile, stole horses from two separate pastures and walked them back to his pasture where trailers were waiting. Then he fixed his fence.”

An arrest was made by Navarro County Sheriff’s Office after the horses were reported stolen.

NCSO believes that 74-year old Clifton Ray Coines was the suspect and enough evidence was obtained for an arrest warrant.

Clifton was arrested Wednesday afternoon at his home on a felon warrant for theft of livestock.

It is believed by the victims and the Navarro County Sheriff Elmer Tanner that Goines may be selling the horses for the horse slaughter market and one of his places of doing business is Kauffman Kill Pen and Elkhart Kill Pen. Horses from a prior arrest were found at Athens Sale Barn in Henderson County, TX.

We have not verified this but Jarod and Sarah also say, “He (Goines) is a convicted felon who is on parole as he was just released in the last year from jail for stealing horses. He will not give up the location of our animals.”

Stolen Horse International spoke with Casey Throndson, a former horse theft victim who says, “He  (Goines) stole two from me. Both registered AQHA. A grey ranch gelding named Possom and a palomino mare. My mare is a world champion pole bending horse. She is retired and lives turned out to pasture with Possom.”

Thorndon continues, “The only thing he admitted to the police was that he sold them to the Kaufman kill pen.”

“The amazing detectives who came today and are handling the case were the same ones who arrested him last time. Sonny won’t admit or give leads to where our horses (our KIDS) are! please keep sharing and posting and calling around.”

Goines was arrested and charged with two counts of theft of livestock. His bond is set at $50,000.

“Jared and I are overwhelmed with the people reaching out and stepping up to help. Thank you!” 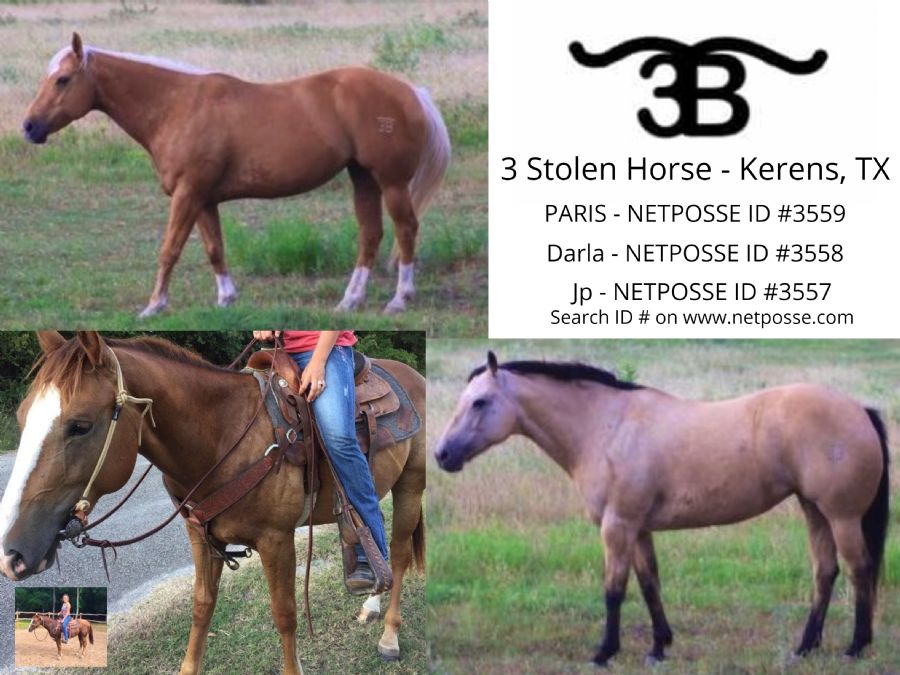 Casey Throndson had horses that were stolen in
March 26, 2019.
They were recovered after being seen at the Kauffman
Kill Pen.

All three horses have been recovered but this is still an important article to read becaues this can happen to anyone.