On October 1, 2020, a government directive will make microchipping of all equines in England mandatory. The details for the animals will be housed in a central equine database which will help law enforcement trace owners of stolen and abandoned equines.

A similar program, released in draft form in April 2005 by the U.S. Department of Agriculture (USDA), The National Animal Identification System is perhaps the most hated federal program in rural America. The plan proposed sweeping changes in the way animals are managed on small farms and ranches.

Although microchipping Is not mandatory in the United States, this type of identification is important in the identification of horses, as we have seen with cats and dogs.

Microchipping helps local authorities in recovering lost and stolen equines.  Although there is no central database officially, Stolen Horse International does offer an all equine ID registry nationwide for microchips as well as all other types of equine identification.

All equine owners can help ensure their animals’ details are kept up-to-date on the NetPosse ID record-keeping registry.

The database can be accessed online via the website and holds information on donkeys, horses, ponies, and companion animals not only nationwide but worldwide.

Stolen Horse International, the first to offer microchip kits sold directly to the consumer in 2002, highly encourages horse owners to use the microchip as one form of equine ID.

Stolen Horse International founder Debi Metcalfe says, “Identification of our horses is often a forgotten but very important part of equine ownership. Each year thousands of equines are missing in various ways. Even though the system is far from perfect, recoveries could increase if our horses carried their VINs with them.”

Stolen Horse international supports all types of equine ID but firmly believes microchipping is a quick, low cost and simple way to ensure that your equines and pets can be identified when needed. VINs in horses can also help during disasters and even when horses are abandoned.

Metcalfe says, "Pick a method that fits your needs and just do it. JUST ID! I've never had a victim tell me after their horses was missing that they were so happy they didn't take the time to ID their horse."

You can purchase microchip kits with the NetPosse All Equine ID Record-Keeping Registry in the NetPosse Store. 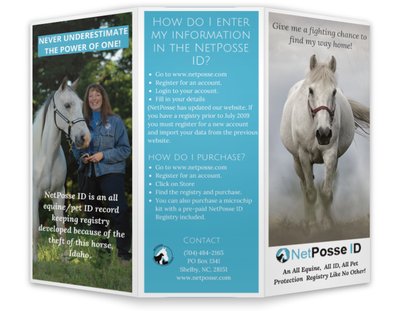 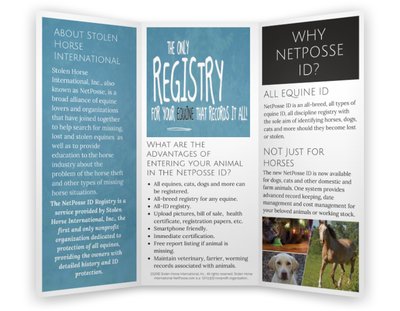