Have you seen Bunny?

Have you seen Bunny? 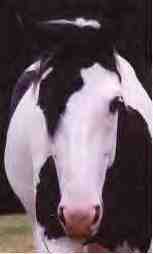 Bunny was a beautiful paint filly who graced our pasture in May of 1999. She was the first colt we had the honor to witness being born. She was becoming a beautiful mare. She was the most friendly of the herd, an exceptionally fast learner. I spend a lot of time with the young ones and by the time they are a year old, they have been tied, clipped, ponied, saddled and hopefully trailer trained. Bunny was an easy one. At one and half years, I had the thrill of sitting on her back both with and without a saddle. I so looked forward to this spring to ride her.

As you know, horses want and learn a routine. Like clockwork. They showed up every afternoon and every morning at the barn waiting for me to feed them. The night of January 9th it was a beautiful full moon, even the two nights before were bright and beautiful. With all the white on her body, Bunny glowed at night. We had been experiencing many days and nights below freezing. Bunny and the others had been led into the barn to eat and later let out to munch on a round bale of hay. As a routine, they moved about at night as a herd to various places on our 41 acres and returned to the barn about daylight waiting for me.

Wednesday morning, January 10th, all but Bunny had shown up for breakfast. I got the others started on breakfast then grabbed a halter and hiked down to the lower pasture. I felt it was the most obvious place to look. No sign of her, gate still closed, no fencing down. I then hiked all over the farm, calling for her, checking the fences. I found only one place where a horse might with desire and effort be able to escape without injury. This increased the search about another 150 acres. After warming up, I began to search on a four wheeler, stopping to walk and call for her. While warming up again, I contacted neighbors and the sheriff's department to inform them my horse was missing in the event someone in the area called in. The neighbors have called several times in the past to report horses loose, but they were not mine. This time it was mine and she definitely stood out with all that bright white on her.

To make this story shorter, my husband and I searched the area on foot over and over. There were no tracks due to the frozen ground. Woods, frozen ponds, ditches, gullies, creeks, thickets. No Bunny. People with horses in a two mile radius were contacted. Bunny was officially reported missing/stolen at the sheriff's department.

Although we began to immediately check local horse sales and inform as many people as possible, we continued to check out other places that just maybe we missed her....dozer piles, thickets, properties outside our two farms. We even flew over the area in a small airplane, knowing her white body would stand out. No sign of Bunny. I needed to eliminate as much doubt as possible that she was still close. With the help from my sister-in -law, a flyer was made. I began to mail, e-mail and post the flyers of my missing horse.

A "don't want to be a surfer of the web", I learned about many horse related websites. Bunny was added to the many missing and stolen ads for horses. The news of Bunny began to spread.

I was contacted by a woman from California whom the flyer had been forwarded to. She told of the amazing story of how four rodeo ponies were recovered so quickly and gave me advise and tips for my search. It took three families working 10-12 hours for 2 1/2 weeks to recover the ponies. A lot of work, a happy ending, encouraging. A wonderful group of local trail riders with a good cause posted Bunny on their website and became active in spreading the information.

A lady from NC, Debi Metcalfe, was a godsend. She saw Bunny on one of the websites and immediately became a Bunny fan. I read ads and stories about her mare, Idaho. Idaho was stolen and recovered nearly a year later in 1998. See her website, www.netposse.com.

Debi has been helping others since to recover their horses. I was in tears and motivated by the story of how she was reunited with Idaho. I so much looked forward to the day I would see my sweet Bunny again, touch her, talk to her, look into those pretty eyes, one brown, one blue. Debi gave me a big jump start for my mission. She e-mailed her notes on horse sales and contacts she had learned about during her search. She redesigned my flyer for more appeal this time it read "Stolen" in red. It had been hard for me to use the word "stolen", I was stuck on "missing".

The reality was that it was possible and that was the only other choice at this point. Especially since I had learned thru new contacts, that a black and white paint mare had been stolen about 3 weeks prior about 45 miles south of our farm. Everyday I made a new contact, someone to e-mail and mail my flyers to. I continued to "surf" and find more contacts. I felt I had all the local horse sales covered. Friends and acquaintances continued to provide more contacts. The flyers continued to spread. At least once a week, someone would contact me and offer to go above and beyond what I had at least hoped for. You know who you are and I thank you from the bottom of my heart.

Still trying to keep this story shorter. I was on a roll, having made many contacts in MS, KY, AL, NC, ARK, MO, FL, OH, TX, OK and across TN. I was finally beginning to get some wheels turning as far as advertisements and stories in horse publications and soon the local paper. It seemed the teletypes sent to surrounding counties had gone ignored or seemed insignificant. I began to contact them personally. Sometimes it takes a real live person to get their attention and motivate them to help.

Of course nothing was moving fast enough for me. I was becoming impatient. I had been devoting a few hours a day "on the Bunny trail". I learned about branding, microchips, tattoos, border patrols, slaughter houses. I thought about Bunny everyday. I comforted in feeling that someone innocent had bought her and was crazy about her. How could they not be? She was beautiful and so loveable. She was not going to be hurt or abused. They would be so proud and show her off. But it was going to be painful for them when I found her, and such a red letter day for me.

Back at the farm. My husband had noticed some coyotes on the farm at night, even around the horses. About two weeks ago, he and a friend took a flashlight with them to a big ditch where they had seen tracks. Large ditches run thru the farm. It appeared the coyotes may have been moving into a den in the ditch where a large tree had long fallen and appeared to leave a large enclosed cavity behind it, now blocked by the trees and brush. They had noticed a "doggy" smell. They left markers to check for future activity. My husband checked the "den" area again a few days later and saw no change.

I returned home from riding this past Saturday, fed the horses and walked into the house to prepare supper. Within a few minutes, my husband told me the Bunny mystery was over. He had been back to the ditch. He investigated further and found a hole over the cavity area camouflaged by brush and weeds. This "bear trap" as he described it, was over 8 feet deep and at the bottom he could saw a hoof. Oh God, it was Bunny! She had fallen into this hole with no way out. The brush and weeds had pulled back over the opening to camouflage this pit. We had walked within a few feet of her so many times and never knew it. My heart was so broken and I know my husband had dreaded telling me this all day. He had obviously been suffering all afternoon. Bunny had been his favorite.

I wept. I went to the barn to check on the youngest colt, Presley. I rubbed him and held him as I wept for Bunny. Presley loved her and had been obviously depressed for a few days after she disappeared.

My husband had contacted a friend with a backhoe. Plans had been made to pull off the brush, fill in the pit and redirect the ditch to eliminate another tragedy. I set out walking the following morning to locate the pit. My husband had laid some corner fence posts over the pit. I looked down into this 9 foot hole which appeared to be large enough at the bottom for 3 people to lie down. There I did see clearly a white leg and hoof and Bunny's dirty white body.

I wept as I am weeping now while I write this. My sweet Bunny girl had been close to home all this time, helpless. Horses have been all over this farm for years, how could something so freak happen? Why couldn't I have fallen into this pit instead? I am certain I would have survived and it would have been much painless than what I am having to endure now.

I tried to watch as the backhoe filled in the cave. It was too painful. It hurts every time I look out the window in the direction of the ditch. Two months to the day she disappeared, she was found. The day after a full moon. It was not the reunion I had dreamed about. It is like my sister-in-law said, the loss of our pets is so painful because they gave us so much joy.

I want to thank everyone who took time to be of assistance. We had every reason to believe Bunny was stolen. Some of you went the extra mile.......Tina, Kippie, Marty, Bo, Debi, Kim, Babs......... Please continue to help others with missing/stolen pets. Without them, the world would be a boring place. I am going to organize my notes for future reference to help others in their search for missing horses.

Please forward this to everyone you may have e-mailed about Bunny, this case is closed.