First, let us clarify that the title of this mailbag question is not exactly what was asked by Veleda Cordes. There are only so many characters allowed for a title so we had to change the actual question.

Veleda was following a thread on our Facebook page, Stolen Horse International-NetPosse Missing and Stolen Equine, titled Horse Buyer Beware. In the discussion, people were discussing different types of ID regarding what works and what doesn't, or even when it works.

Veleda asked, "So basically if you owned it from a foal you have no proof?"

This is a very good question. One assumes that if a horse was born on your farm out of a mare you own that there is no doubt that the horse belongs to you. Well, maybe not.

What kind of situations can you think of where the ownership of homegrown horses may come into question?  Here is one example that the founder of Stolen Horse International, Debi Metcalfe, encountered a few years back while working with a victim to recover a stolen horse that had been located but not returned by law enforcement.

To answer the question Debi Metcalfe said,  "We would think that you do own a foal you have raise but without proof, you may have some trouble where law enforcement has no clue what constitutes actual proof of ownership."

Metcalfe asked him, "What about foals that were born on my farm? Are you saying I don't own my horse?"

He replied, "No. Not if you have no proof of ownership."

Metcalfe thought at the time that even the detective knew how dumb what he said sounded. It worked for him in that particular case and he was sticking to it.

It was the first time that even Metcalfe, who owns a horse named Montana that was born from Idaho, Metcalfe's own stolen horse, would need proof of ownership. Like most everyone else she assumed that if Montana was born on the farm, never left the farm then that was proof enough. Not in this case if she had been the stolen horse it seemed.

The horse, in this case, Fancy, was stolen in the night from her pasture. It was later discovered that a caregiver who was caring for the elderly owner's wife during an illness had taken a Paint Horse registration that had never been registered and registered the horse in her name. She did this before taking the horse and crossing into another state.

The horse was found and located relatively quickly. Metcalfe was on the phone listening to the exchange between the officer in that state, the farm manager who found her, and the person who had taken the horse.

A new registration paper was presented to the officer by the person who took the horse. She stated the horse was hers because Fancy was registered in her name. The officer unknowingly thought that was the same as a title to a vehicle and left the horse where it has been found. He also said that if the horse had had a microchip that the person of record would have been the owner.

Of course, all of this changed for the worse when the real owner tried to get his horse back home. The DA sided with the officer and decided to put this case in civil statutes instead of the criminal statutes that had been issued originally because there was a legal document in play.

Furthermore, the detective still stood his ground about the registration and the fact that if you don't have proof you own a horse you have raised then you don't own it.

Metcalfe learned many lessons in this case which emphasized how one never knows what may be considered as proof of ownership for a horse when law enforcement and the justice system are not familiar with horses are the laws that are more specific to equines.

To help people not suffer the loss of a horse in the future as this owner did, the NetPosse ID Registry, which has been around as an all equine ID registry since 2002, got an upgrade. This upgrade added more record-keeping items to the registry to help prove an even better ownership trail for all horses. While adding better safeguards for owners Metcalfe kept Montana, her horse raised from a foal in mind.

Metcalfe already had a good start on proving Montana was her horse. But, maybe even that could not be good enough one day. Montana has a freeze brand on her hip, a freeze mark on her neck, and a microchip. But, without all of those types of permanent equine ID registered somewhere, how could she prove she owned her horse if she ran into a problem similar to the one Fancy's owner did?

It is the goal of Stolen Horse International to leave no stolen or missing horse behind because of lack of preparation. All of the permanent IDs are listed in the NetPosse ID registry as well as many other markings, characteristics, pictures, documents, and a way to keep your records.

This is why you should purchase the NetPosse ID from our NetPosse Store on the website. We learn from our cases and do our best to fill the gaps. No other registry does this anywhere. Why? Because the people who run the registries don't know what the problems are in the field. We live through those problems every week with victims around the world.

If you have any suggestions for something you think would help make our registry better and keep bringing horses home, we would love to hear from you. Click on the Contact Us tab and tell us what you think.

Post note: Keep in mind that the case that was an example in this article was one case that was used to show how things we think may be obvious may not be the way we think. Other situations could be entirely different. Check with local laws, attorneys, or law enforcement to see how this would be treated in your area. 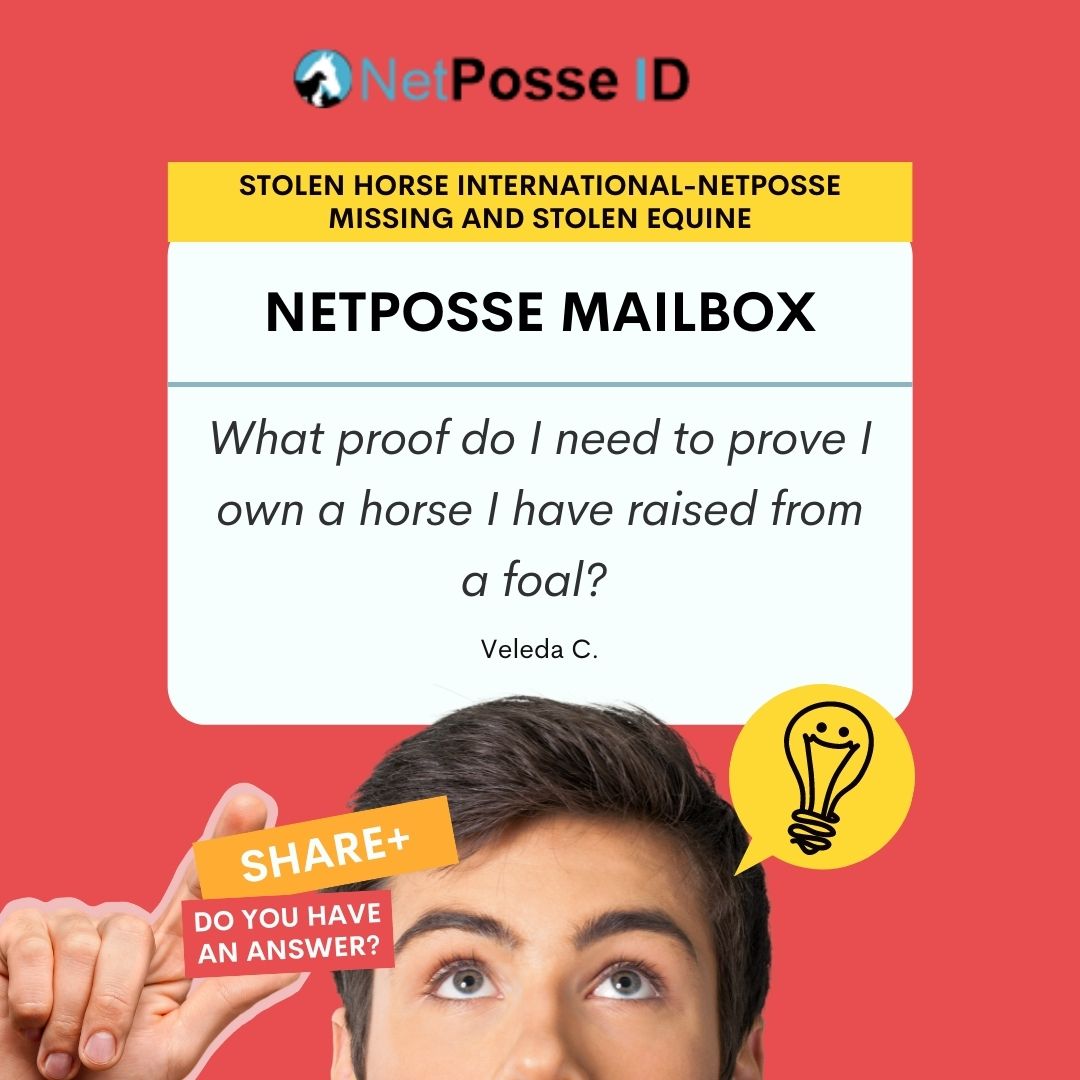 NETPOSSE MAILBOX- WHAT PROVES I OWN MY FOAL?

Veleda Cordes, if you bred your mare. Keep all records records. Stud fee booking , registration papers, vet, farrier, for both mom and baby , MICROCHIP your horse to you ! Coggins etc…. Thanks to netposse I did these things and it stopped my pony from being stolen. It stopped the perps in their tracks. I took all the paperwork down to my local police dept. and informed them that people where trying to take my pony. The police called and informed them that the theft would be larceny and they would be arrested if they touched my pony.

What to do after NetPosse posts alerts on Facebook

NETPOSSE MAILBOX: How To Trace A Horse Brand

Preparedness: Key to Equine Survival in a Tornado