CHICAGO- Wednesday, April 18, 2012: For years Rita Crundwell has kept an eye over virtually every dollar that passed through the small town of Dixon's coffers as city comptroller while also running one of the most successful horse farms in America. On Tuesday FBI agents led Crundwell from City Hall in handcuffs on charges she misappropriated more than $30 million in city funds in just the last six years. Much of the money went to pay to operate the champion horse breeder's Meri-J Ranch, authorities alleged.

In spite of a city salary of just $80,000 a year, Crundwell lived extravagantly, spending huge sums on her horse farms in Dixon and Beloit that raised champion quarter horses as well as $340,000 on jewelry since mid-2006 and $2.1 million to buy a luxury motor home fit for a rock star.

Crundwell's apparent downfall came because she took off four months a year - all but a month unpaid - to operate the horse business and travel to shows.

She was also one of the best horse breeders in the world - her Meri-J Ranch in Beloit produced more than 50 world champions, according to the American Quarter Horse Association.

Among the items prosecutors claim she purchased with stolen city funds were two semi-tractor trailers and a horse trailer worth nearly $1 million combined.

Between January 2007 and March 2012, she is accused of racking up more than $2.5 million in her personal American Express card and using funds from the secret city bank account to pay them off. 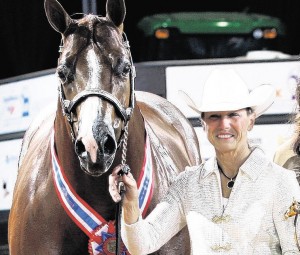 More links to this story

Guess What? YOU Are The One!