"Christina went to Facebook and found the flyer and pictures. Without NetPosse, I don't know if she would have found my page. I know that being able to post and repost (the NetPosse Alert) to keep Beau in the minds and eyes of people made a big difference. You guys are the best. Even if I hadn't gotten Beau back, the support from the huge membership was very helpful to me, it gave me hope. :)"

I got a call today from a woman who asked me if I was missing a horse. I told her that I was. She told me that she had Beau. The story was that she got a text from her neighbor who found Beau on his property and figured it was this woman's (Christina's) horse. She said it wasn't but she was curious and had to go deep into the woods.

Christina told me that he walked right up to her and she put a halter on him and led him out and let him eat and drink on her property. She said that she knew she had seen him before and she went to Facebook and found the flyer and pictures.

Christina told me that she had called the Sheriff yesterday and was told that they didn't have any information about a missing or stolen horse! The flyer is posted in the lobby of the Sheriff's station as well as nearly every other place in town. I'll send the Sheriff another note.

New Beau pics in other pasture below. Not great, but I was rushing.

We couldn't get there fast enough - except getting the trailer out from the breezeway where it's kept was tricky (it always is. When we pulled in, there he was, Christina was holding him with a lead. I noticed his condition was excellent for a horse missing for 48+ days. I also noticed that most of the red in his mane had been pulled.

But it was for sure Beau! When we got home we put him in the pasture with our old palomino mare until we had an opportunity tomorrow to check the back fence where Christina thinks he got out. Beau went straight to the salt lick. Other than having his forelock pulled and the parts of his mane that had red in it, he looks pretty good. Somebody had him, and once the Sheriff started making calls to the people on the list, Beau turns up.

If you look at the pictures in the flyer, you'll see Beau has a long mane with red. The new pictures don't really show it, but his mane has been pulled and the red hair is gone. His forelock is gone. Somebody had him and pulled out the red. He's in really good shape for a horse missing 48 days.

We're just so happy that he's home, safe and sound and he seems to have been treated pretty well. Thank you everyone who sent out the word and spread his flyer. 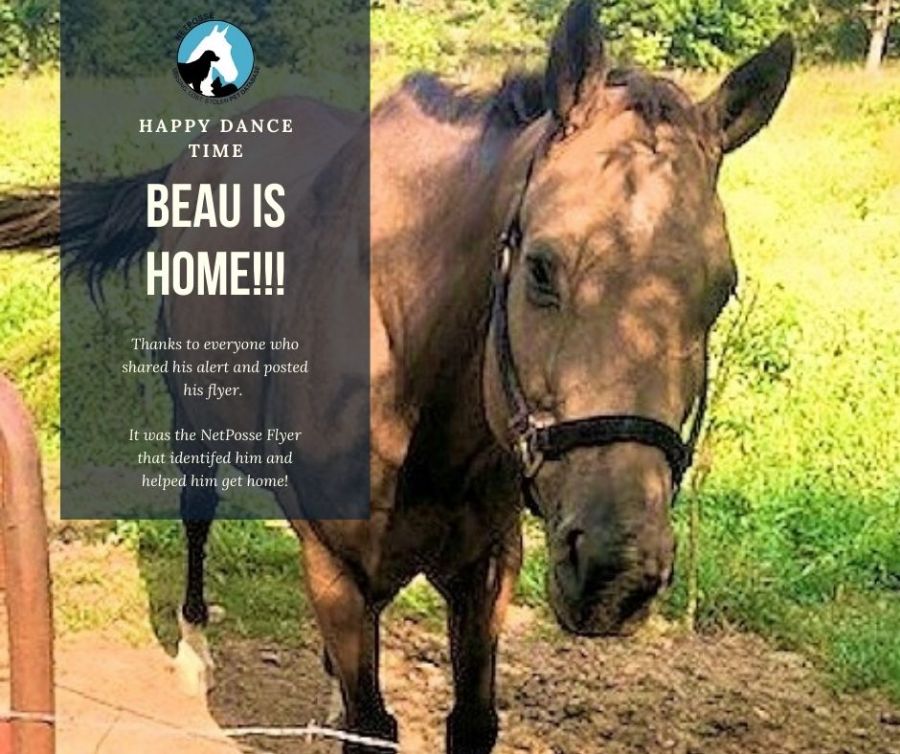 This custom NetPosse flyer identified Beau and brought
him home.