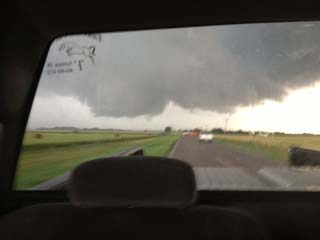 "A special thank you to Stolen Horse International aka Netposse.com and their volunteers who raised money for fuel and expenses.” 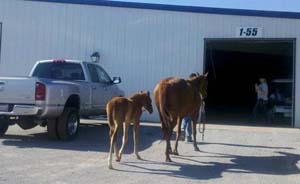 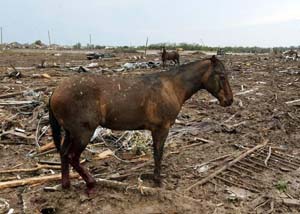 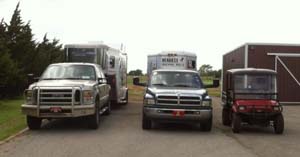 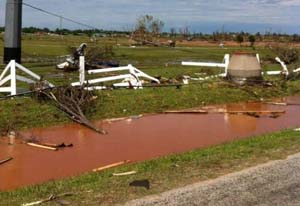 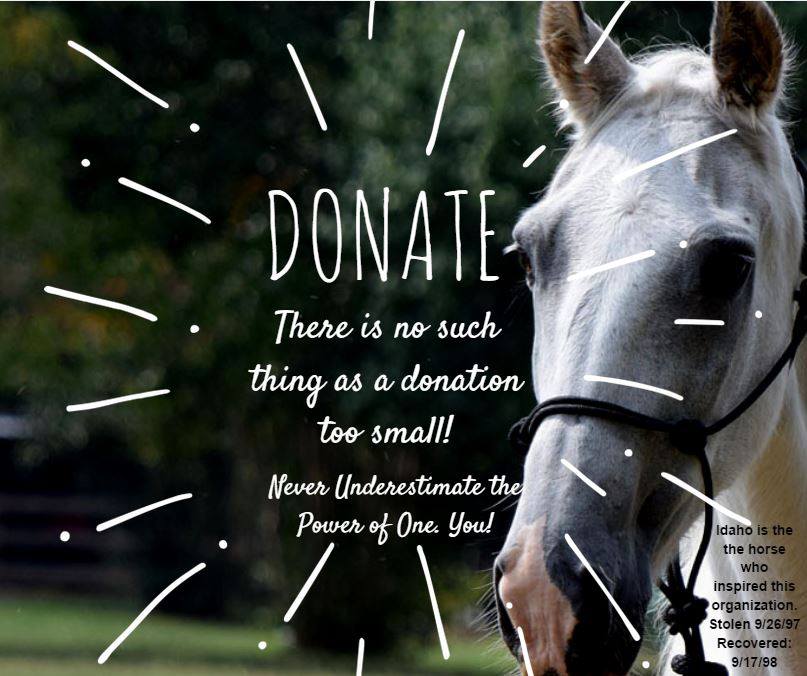 June 3, 2013 - This is a story about a few wonderful individuals I have had the privilege to work with that are heroes in my book and who are making a difference in a small equestrian and farming community after tornadoes ripped through it.

On Monday, May 20, 2013, tornadoes devastated Moore, Carney, Dale and other areas of Oklahoma. The EF-5 tornado struck Moore, Oklahoma killing 24 people, damaging 13,000 homes and schools in the area. Everyone has seen the devastating photos of the area and some showed horses in the rubble. However, not as much was mentioned about the 600 or more livestock and horses that needed assistance. Over 200 horses were killed or euthanized because of extreme injuries. Only about 38 horses survived. Veterinarians and volunteer responders were working almost 24 hours a day on the capture and care of the surviving horses and livestock.

Dan Mullenix, co-founder and CEO of the newly-formed, Oklahoma Livestock First Responders (O.L.F.R.) along with co-founder Dr. Clayton McCook, DVM with Equine Sports Medicine & Surgery have had plenty of hurricane experience, but nothing prepared them and their team for what they would encounter over the next few weeks.

Dan knew that this particular storm was going to be devastating when he saw the weather reports. “I was sitting at home on Monday, May 20th 2013, and after watching the weather I had a gut feeling and told Abby Janssen (fiancé and COO, O.L.F.R.), we need to hook up the trailer because this is going to be bad. I called our team members Kim and Tim Lindsey, Allison Muzzicka and Amanda Eggleston. We followed the tornado into town trying to get to one of farms that got hit badly.

We couldn't get that far due to downed power lines, so we sat waiting. All of a sudden there were people coming out of the dark and rubble cluttered area leading horses to us, we loaded the trailers and hauled them to Dr. Wylie, DVM’s clinic, Equi-Center Veterinary Hospital, on the north side of Norman where we set up triage with the assistance of Dr. McCook. We unloaded horses, washed off the mud and via flashlight started checking for injuries, treating and saving horses as best as we could.”

When Amanda Eggleston arrived at Celestial Acres, in Moore, she felt sick from seeing all the news images, praying some were saved because it was her hometown. She grew up showing horses, doing pony club activities and playing polo with many in the community. When she arrived in Moore she sadly recalls, “The only way I knew that I was at the Celestial Acres Training Facility was their gate. I felt like I was punched in the stomach when I realized it was really gone. It was one thing to see it on TV. I felt like I was in a movie. I felt like this couldn’t possibly be real. There was nothing left.”

Tuesday, May 21, 2013 they rounded up as many as they could, but traffic was bumper to bumper and they couldn’t get back in because of the road conditions and the chaos with their large rigs. They worked on the outskirts of Moore offering assistance to any they could find.

Dr. McCook and Dr. Chancey, DVM with Remington Park Race Track were able to gain access and go door to door through the affected neighborhoods to several small farms. They found several horses that had numerous lacerations, abrasions and injuries. They were all in deplorable and dangerous conditions with debris everywhere. Several were in barns that were on the verge of collapse.

Dr. McCook did a video interview with HRTV (link at bottom) in which he drove through the area of Moore and stated, “You see images on TV like everybody else and the helicopter flies over and all that but seeing it in person is just entirely different. Working on the race track you see horses from time to time break down. They fracture their legs and things like that, but you don’t ever see a 100 horses in a shape like that. You don’t see a whole field sort of littered with unspeakable things that have happened to them. I think that is the thing that is the toughest, the scale of numbers.”

Dr. McCook goes on to say, “It’s a tough scene and I will probably spend the rest of my life trying to get some of those images out of my head. It’s not something anybody should every have to see. I’m glad I went. Somebody needed to be there. I think all of us agree that, the veterinarians in particular I have spoken with that made their way down, we needed to be there for that reason. We take an oath and we just tried to do what we could. I don’t have any regrets about going down there. I would do it again in a heartbeat.”

Tuesday night after seeing all the devastation, Kevin Trimmell, the Facility Manager for Heritage Place, spoke with his boss and Remington Park Race Track to open up their facility to horses displaced by tornadoes until their owners could get back on their feet. Kevin is also part of the O.L.F.R. team. Kevin says, “We are a close knit community working with area veterinarians and horse owners like a family. It was only natural to open our doors to assist.”

Heritage Place has 660 stalls with everything needed to offer shelter since it is their off season. Horses that were healthy enough for transport were moved to Heritage Place to make more room at the local equine veterinarians to treat injured ones. Heritage Place has also been a central drop off location for much needed medical supplies, feed, hay, halters, buckets, fly spray and especially stall bedding (which they are running out of) since they have the storage.

Once Heritage Place was all ready to start receiving guests Kevin and some of the team delivered feed and hay to horse owners in Moore and in the Carney areas. Kevin told me, “It a wonderful surprise when Ms. Rodeo Illinois, Cassandra Lynne Spivey showed up with two friends with donated hay, feed and other supplies they collected. They asked if they could go with me to help deliver to farm owners. So we loaded up everything and were on our way. It was a real joy to watch these young people interact with the residents that were so grateful for the help and supplies.”

I spoke to Dan Mullenix close to midnight one night after he and his team had been out working all day capturing not just loose horses, but also a very rowdy 1,400 lb. bull that didn’t want to be caught. Near exhaustion, Dan said that he had to take a moment to cry for everything he had seen and for everyone in the community that had lost so much. Walking live horses past the dead ones was really hard.

Dan’s voice cracked a little. “I have seen a lot of things in my life but nothing can prepare you for this amount of devastation.” Dan also described one encounter with a resident who slipped something into his back pocket. When Dan got home that night after 1:00 a.m. he checked his pockets and found the $60 dollars. He remembered the exchange with a little tear because the people had lost everything and were still willing to give to help others.

For the next two weeks the O.L. F. R. Team worked helping capture, doing triage with veterinarians and taking the survivors to different facilities based on need. They delivered hay, feed and supplies to wherever was needed. They took the time to followed-up with residents they had already helped, checking on them to see what they needed. All were so happy just to shake their hands, hug and thank them. One such follow-up on Tuesday, May 28 was a blessing for a very thankful elderly couple that had 11 horses that needed to be moved because their farm was damaged beyond repair, without water and it was dangerous for the horses to stay in that area due to debris and downed fencing. O.L.F.R. moved them to Heritage Place where they could be tended to until the owners were back on their feet.

Kevin is so thankful to help and is always on the lookout for people in need. Taking care of the surviving horses and giving them what they need, this is often comfort. When the second round of tornadoes hit May 30, he told me he and his son rushed back to Heritage Place to be with the horses because he knew they would be scared because the weather was fierce. One mare was so scared they rode out the storm with her in the stall to help keep her calm. It was a frightening experience but they would do it again.

They are still without power at their facility but everyone is safe and that is what matters. Kevin with a smile in his voice tells me, “It makes you feel really good about the nation to see all the support and items coming in to help. It is just amazing how much people are helping those that have lost everything.”

Amanda shares this bit of new wisdom, “I have learned a lot over the past couple weeks and now have a much better plan for tornados as a barn owner. We are getting all of our horses microchipped. We are also ordering halters with our barn name and phone number on them in case horses get off the property. I cannot say thank you enough to everyone that has donated and helped out the numerous vet clinics and feed stores. It is wonderful to see the look of relief and thankfulness on the owners faces knowing that their horses are safe and their vet bills are covered.”

Dan’s final thoughts, "At any given moment tragedy can strike. I'm very thankful that God has pulled such a great group of us together so we can make a difference. I also want to thank everyone in the community we met that offered a kind word or assistance. I tip my hat in thank you to the veterinarians who were treating injured livestock. A great thank you to Kristie Bellemore with Bluebonnet Feed for feed donations. A special thank you to Stolen Horse International aka Netposse.com and their volunteers who raised money for fuel and expenses.”

Oklahoma First Responders’ goal is to have a plan in place for natural disasters for all of Oklahoma. They are working with government agencies to outline a future plan in case a disaster like this strikes again. “We all know that the reality isn’t if, but when and how bad? Next time we will be ready.”

Happy dance time for lost horse and dog in Mississippi