Lessons from Candy (from Endurance Riding))

Lessons from Candy (from Endurance Riding))

I had never heard the name Sara Ashley Hobbs before. Not before #Candy, that is. Candy is a 13.2 hand #Quarterpony, short in stature, but stocky and stoic. She tolerates anybody and anything, coming as close to “dead broke” as they come. She has a soft eye, a shiny bay coat, and a quiet, calm demeanor. She is truly the Mary Poppins of ponies.

Candy came to #Lightfoot Horse Farm on May 1st. Her owner, after hearing of how we had tragically lost two of our main schooling horses nine months apart from each other, loaned Candy to the farm for the youngest, most beginner riders to love on and learn from. She was well cared for here, and it took no time at all before we all fell in love with her. After going through a string of horses that didn’t work out for our schooling program, we finally found one we wanted to stay. We were confident Candy would be with us for a long while at Lightfoot Horse Farm, to live out her retirement years being doted on by a multitude of little girls and boys.

What happens next is something out of a novel, or a daytime drama. Candy went missing. She literally just up and disappeared. One minute she was in my horse paddock, eating and drinking with the other horses. The next she was gone. At first, I thought it was a joke.

She must be behind the shed in the back stall.

Maybe behind a tree?

Next to the water trough?

She’s hiding. This is a joke. This is so silly, it can’t be. She has to be here.

My heart was pounding, my senses on high alert. My breathing started to pick up, and my eyes darted back and forth, scanning the entire area, as my son, Jakob, continued to walk the same circles around the horse paddock, holding Candy’s fly mask.

Okay, she got out.

But the gate was latched.

“Jakob, maybe she got out. Maybe she’s somewhere on the field. You and Declan should walk the entire fence line along the property.”

Crazy thoughts raced through my head. Was she injured? Did she colic? Am I going to find her down somewhere?

The boys reported back to me that they couldn’t find her. I asked them to walk the perimeter again. They did. No Candy.

“Walk it again! Look again! She has to be here.”

I screamed at my boys, “Walk it again! Look again!”

Jakob’s eyes got wide, and he snapped me back into reality with his own raised tone, “Mom! We can walk it a million times, but she’s not here. Candy is not here.”

I shook my head. No, no, it is an emergency. Just not a life or death emergency.

I grabbed my phone and frantically dialed a phone number. I had to call Candy’s owner. No answer. I called her work, her cell, her work again. Then I called Candy’s breeder. Then I called the sheriff.

… and that’s when I learned who Sara Ashley Hobbs was.

It wasn’t long before we realized Candy had been stolen. Her owner had received a text message from Sara, admitting that she was the one who arranged for the horse to be taken.

This is when I learned Candy had been Sara’s childhood pony, from 1997 to 2006. In 2006, Sara gave Candy back to her original owner when she moved to Massachusetts after her parents’ divorce. Sara had seen photos of Candy on the Lightfoot Horse Farm Facebook page, and decided, after ten years, she wanted her childhood pony back for her own two children. When she asked Candy’s owner for her back, the owner declined, stating that she didn’t believe it was humane to ship a 27-year-old pony across the country in the middle of the summer, to a climate she had never lived in before. 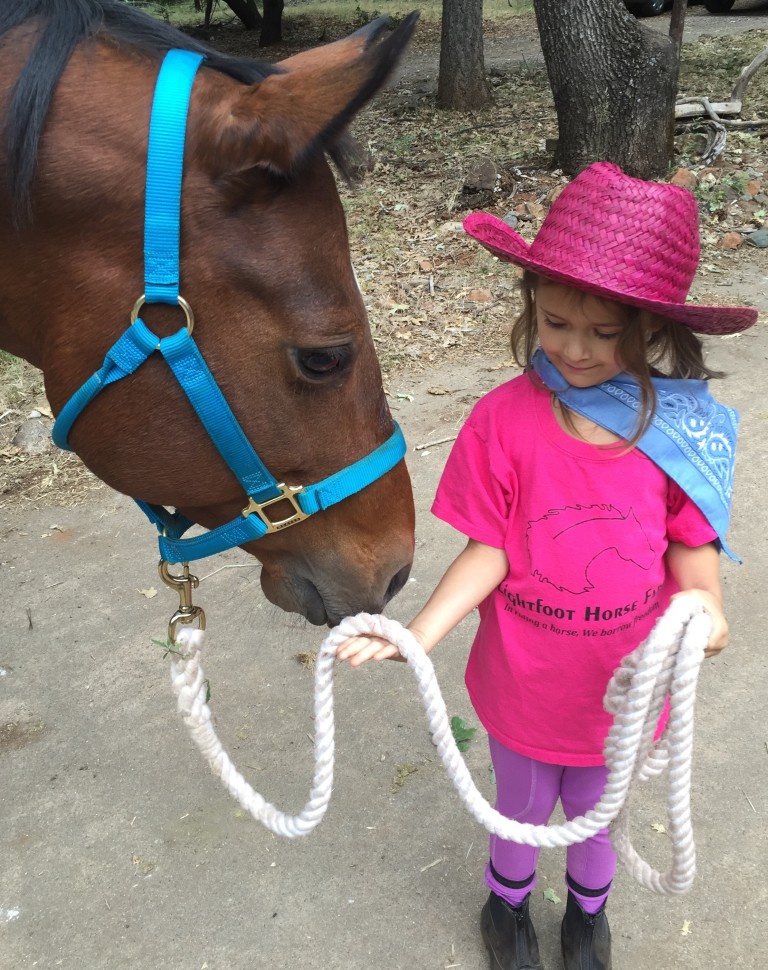 So, SaraAshley Hobbs took matters into her own hands. She arranged for someone to pick up the pony from my place and house her until she could have Candy transported to Massachusetts. She had somehow come to the conclusion that Candy belonged to her, even though she hadn’t cared for the pony in ten years. In Sara’s mind, she was simply taking back what she believed to be rightfully hers. The only problem is that she reclaimed “her” horse illegally. She never contacted me. Not a letter, not a phone call. She had a stranger come on to my property, enter my horse paddock where my other horses were housed, and walk off with a pony, all without my knowledge. She completely violated my privacy, and the privacy and security of my family and my animals. What if the wrong horse had been taken? What if the gate had been left unlatched and my horses had gotten out?

In light of this realization, the next several hours after Candy went missing were a whirlwind of reports, phone calls, and research. Our dining room table looked like something that belonged in a conference room, and I felt like I had suddenly been thrown into an episode of CSI.

A report with #Stolen Horse International was filed, all local animal controls contacted, photos of Candy sent to all the veterinarians in the area, and shipping companies notified.

We located Candy late in the afternoon the next day, after a terrible sleepless night. I located her, using just a little savvy common sense and detective work. She was a little over an hour away, sharing a paddock with another horse on Humphrey Road in Yuba City. Apparently, a friend of Sara Hobbs’ family was housing the pony.

I notified the sheriff and animal control in that area immediately when I had confirmation of where Candy was. However, when they went to the house, they were presented with registration papers on Candy, and the last recorded owner on those papers was Sara Long (Sara Hobbs’ maiden name), and the last transfer of ownership was in 1997. Candy’s current owner had not completed the paperwork for a transfer of ownership in 2006, the year she re-acquired Candy.

I realized then that I was simply an innocent third party caught in the middle of a civil dispute over who was the legal owner of this pony. I knew I would never see Candy again, and I would have to tell the students what happened to their beloved pony, the one they thought was here to stay. I felt angry, sad, confused, and violated. Completely violated. The way in which Sara reclaimed Candy was not only illegal, it was morally wrong. But I had no proof of trespassing. No eyewitnesses, nothing caught on a security camera, no evidence of forced entry because I didn’t have locked gates. The only thing I knew was that I had a pony in my custody, who I was loving and caring for at my own expense, who was here one minute and gone the next. And no one got to say good-bye.

Not the twelve-year-old girl who braided Candy’s mane the day she arrived. Not the eleven-year-old who was scared to ride the big horses because being so far off the ground trigged her anxiety. Not the seven-year-old who could groom Candy by herself because Candy was just the right size for her. Not the slender, quiet five-year-old who thought she was going to be able to ride Candy in a lead line class at her first horse show. Not the eight-year-old boy who cried when he found out Candy wasn’t coming back, for Candy had been his first and favorite horse experience. Not the six-year-old girl whose hair is just now growing back, for she’s finally entered remission for leukemia.

Not even my own son, who refused to ride for an entire year after our beloved Appaloosa, Forest, left us after we tried for eight months to save him. Forest was the only horse Declan trusted, and no matter how hard I begged, bribed, and pleaded, I couldn’t get him to ride after Forest died. One week ago, Declan climbed on Candy’s back.

Until this actually happened to me, I thought stealing horses was a thing of the past — something that only happened in those Western movies, set in the 1800s. But I’ve come to learn that I am not the only one in this modern day who has had a horse illegally removed from her property. Horse theft is considered a felony in the state of California (and I’ve actually heard rumors that it’s punishable by hanging), but proving you have had a horse stolen is an entirely different thing. Although I knew someone had trespassed on to my property, I could not prove it. The law wants concrete evidence — in the form of an eyewitness, security surveillance catching the trespasser, or proof of forced entry. On top of that, when the stolen item (in this case, a living horse, not a material object) is found, the law wants you to prove it’s yours. So, how can you protect yourself???

I have learned a startling and valuable lesson. The day I added the lock to our gate and hung “No Trespassing Signs,” I was filled with a disappointing sadness. It’s too bad agreements can’t be made on a handshake anymore. And it’s sad we have to lock down our properties in order to protect ourselves. But, unfortunately, you just never know. If you had told me the day I brought Candy home that a woman 3,000 miles away who owned Candy ten years ago was going to come out of the woodwork and make claim to her, I would have laughed out loud. But it happened. I hope my story is eye opening and helps other horse owners to become more diligent about protecting not only themselves, but their beloved equines.

taken from the blog on 7/4/2016 http://www.enduranceriding.me/lessons-from-candy/

Horses and Fireworks - Calming Tips For the Big Bang Event

Never Give Up. Miracles Happen.