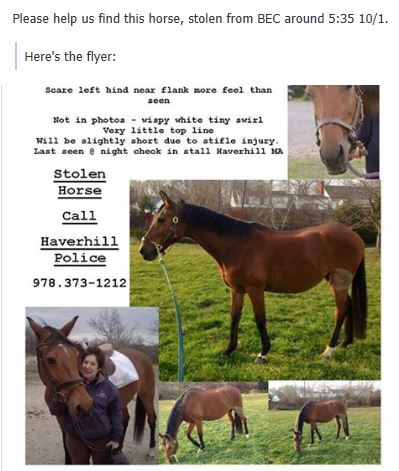 UPDATE: A horse that was reported stolen from a Bradford stable this week has been found — but confusion remains about who took it and why.

The animal, named Lola, was found to be in the possession of a person who either owns the horse or previously owned it, police said

They said there are questions as to who the rightful owner of the horse is, and that Officer Ronald Hilchey is investigating.

The horse was reported missing Wednesday morning after a stable manager discovered it was not in its stable.The stable manager notified the owner of the horse and filed a report at the police station.

HAVERHILL, MA October 3, 2013—Police say there’s a horse thief in the area, and they want to catch the person or persons responsible. They also said the theft of a horse is one of the most unusual cases they’ve ever been asked to investigate.

Lola, a light bay Dutch warmblood, was last seen on Tuesday in a stall in a barn at the Bradford Equestrian Center in Bradford. The horse was reported missing  after a stable manager discovered it was not in its stable.

The stable manager went to check on the horse and found she was gone. He said the stable manager, a woman, notified the owner of the horse and also stopped by the police station yesterday morning to file a report. A woman from North Reading, has owned the horse for a couple of years and boards it at the Bradford Equestrian Center.

Staff members stated that on Tuesday two people came to the barn, led a horse out of the barn and into a horse trailer then left. Detectives are following up on a possible lead.

The horse is also described as having a stride that is slightly short due to a “stifle” (upper rear leg joint) injury. Images of the horse were posted on other online Facebook pages as well, including Granite State Dog Recovery.

Just Taking ‘em Out For a Spin, Boss…