We all know the price of oil has made the price of gas and diesel go up. We’re paying it at the pumps every day. What is less apparent is the cost of getting our food to the grocery stores across the nation. How does relate to cattle and NetPosse? Well, it does and here’s how-

Cattle ranchers have to purchase feed made from corn, soybeans, and other grains. They also purchase hay and alfalfa from growers. All of these depend on farmers who use oil and fuel to power tractors and machinery to produce the products. Most fertilizers are also made from petroleum-so there’s another cost. These farm products have to be moved to the cattle ranchers-another cost. Then the cattle have to be moved to market-another cost.

Is it any wonder that some people have decided to ‘cut out the middle man’ and go get their own beef themselves? Probably not. And, of all things, it’s the cartels of Latin America who are getting into this! No kidding! Cattle instead of cocaine![i]

Problem is-this is what the old-timers used to call “cattle rustling” (and it is still an automatic hanging offense in some areas of the country!). No, we are not recommending it, because we believe in the due process of law. We just thought you might want to spread the word for anyone who might be considering starting their own DIY 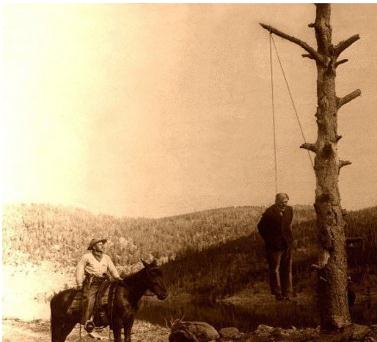 Also, people who will steal cattle “to order” are frequently not “adverse” to stealing horses. Let’s face facts here-they’re in it for the money. If they all looked like this, we wouldn’t have a problem catching them-but they don’t. They are frequently the guy next door, the contractor building houses around the corner, the electrician working in the building you work in, the husband of that nice Hispanic lady who cleans your office, your postal worker, that helpful sales person at Best Buy-just any number of people. They may be people in financial “pain”-and you are their victim. They may also be people who just see you as an “easy mark”. Either way-you lose.

Where is this happening? Where do you see cattle grazing? There’s your answer. In Canada, most cattle ranching is done in the provinces of Alberta[ii], British Columbia, Saskatchewan, and Manitoba. In the USA, it is still in the western states-TX[iii], OK, ND, SD, CO, WY, ID, UT, MT[iv], NM, AZ, and the feedlots are still pretty much in NB, IL, IO, MO. A lot of that has changed as all things do[v]. The long cattle drives are history. The round-ups are pretty much gone. But the rustlers are still with us. The problem is-the cost of being rustled is even higher. One rancher up in Alberta has lost, at last count, 42 head, and the price tag is up to about $500,000. That doesn’t even take into account the calves that might have been born to the cows and rendered future income! OUCH!

Because of the link between cattle thieves and horse thieves, NetPosse is posting links regarding the theft of cattle. We see this as something that needed to be done. The economic losses of both can be tremendous. However-because of the much HIGHER economic losses associated with cattle, we feel that posting their losses and working to apprehend their thieves, we will make inroads on the equine related thefts as well. We believe strongly that our supporters will agree.