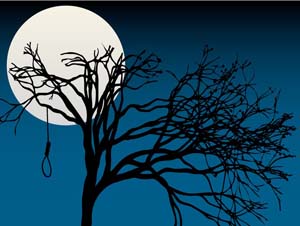 A red pickup came to a North Carolina home, hooked up to their trailer, loaded their horse, their tack and drove away. The daring thief drove down the road waving to neighbors as he was stealing the Lester family blind while they were on vacation.

Nugget, a 12 year old mare, had been a member of the Lester family for 10 years and was broken by owner. She was a member of their family.  Nugget is now just another statistic that seems out of place to so many who do not realize how often horses are stolen, or go missing in civil situations most consider to be theft.

I have often been asked the question, “What happens to the thieves for stealing horses.” I would like to tell you what you want to hear: a fictional version most often seen on the TV screen, one which depicts justice served in the end and the bad guys going off to jail. Unfortunately, that seems to be the exception instead of the rule based on the cases we have seen here at NetPosse.com.

Horse theft use to be a hanging offense in the olden days; it is not any more. Because horses were costly and greatly needed, they became objects of crime. Ranchers feared horse thieves and always guarded their horses. Why? If a horse was stolen, the rancher’s livelihood could be destroyed. It was not uncommon for people from that era to take the law into their own hands when their horse was stolen, and victims were known to punish the thieves when caught, on the spot. Considered low down and dirty, many a horse thief saw a one way trip to a hanging tree.

Horse thieving was considered to be a real crime, punishable by real consequences imposed by our laws in a time when a man coveted possessions such as his horse, rifle, dog and wife, in that order. There was plenty of horse thieves hanged throughout the West. Some of our famous outlaws were known to be horse thieves. Butch Cassidy, for instance, was charged with horse theft but was actually convicted of resisting arrest. It was the second charge that landed him in prison for two years. And what about the Jesse James gang? How many horses did they steal?

Back then, it was considered a capital offense in most states. Because a horse was the primary means for travel, even those in the eighteenth century who pushed for lessening the penalties of the crimes considered capital normally did not wish for a change in the laws relating to horse stealing; an offense considered to be a very serious one.

Other states saw the crime differently. For example, in Tennessee in 1807, Governor John Sevier called for a revisal of the criminal code to abolish capital punishment for offenses such as stealing a horse. That same year the Tennessee legislature authorized a criminal code, which had a very unclear definition of offenses but very precise penalty explanations.

A horse thief was now to receive lashes on the back not to exceed thirty-nine, had to sit in the pillory for two hours a day on three different days. He was to also to be branded with the letters “HT”, which of course stood for horse thief. The same statute continued that if convicted a second time for horse theft, the offender would be put to death without the benefit of clergy.

Whatever happened to the good old days? Oh, how those changes centuries before us have affected the climate of theft today. Horses are no longer considered a necessity (although with the current gas situation that could change) and have become less important when one is stolen.

Laws and the application of those laws vary from state to state, county to county, even officer to officer, on how this crime is perceived, investigated and prosecuted.

When I polled theft victims about their confidence level of the support they were receiving from law enforcement agencies and our judicial system, most believed authorities didn’t really care about horse thieves anymore and had little confidence in their investigations. Some even doubted if there was an investigation in their cases.

In defense of our officers, their case load is heavy and one officer could be investigating 20 to 60 cases at a time. It takes time for any kind of report to be processed and assigned to a detective after an incident report is filed.

And as one officer stated to me in a recent interview about a horse theft case, “They didn’t teach me about horse theft at the police academy. If you don’t know much about horses, investigating a theft of one can be difficult.”

Any time a horse is taken from the owner, the victim considers the offense to be theft. This may not be the case. Normally, the differences between civil and criminal are the details of a verbal agreement, contract or some other factor that indicates that it is a contractual agreement between parties.  However, just because there is a contract does not mean it is not a crime. Fraud could be involved.

Thieves know how to work the judicial system to their benefit, and in some of the cases, I have witnessed lately, even better than officers and attorneys. It seems today that the victims are victimized by our laws and the criminals use their frequent experience to win cases that should never be in our civil courts in the first place.

Years later Dean still wonders what happen to Nugget. He spoke fondly of the horse he spent so much of his time training.

“She was a good horse. I wonder where she is, if she is still alive. She would be 19 years old now.”

When asked if he does anything differently today than he did when Nugget and his equipment was taken he replied, “Yes, I have locks on the gates. We (the neighbors) watch the cars and trucks that go by and note suspicious activity.”

He continues, “There’s so many thieves in this world, no matter what you do, I suppose they can get you if they want to.”