Did you hear the one about the Quarter Horse and the Carnival Cruise?

Did you hear the one about the Quarter Horse and the Carnival Cruise?

By A. B. Travis, for Stolen Horse International

Q.        What do a Quarter Horse and a Carnival cruise have in Common?

Rewind to 2009:  In 2009 Susan Frink, owner of Star of Taffy, discovered her liver chestnut Quarter Horse mare missing from their property.  Susan reported the theft to local law enforcement; the stolen horse Star of Taffy remains missing and is one of the thousands of reports on Stolen Horse International's webpage, www.netposse.org (or .com).

Fast Forward to 2011: Stolen Horse International, Inc. and NetPosse never go on vacation, but founder Debi Metcalfe and her husband Harold try to! However, it rarely works and work found a way to find them even on a cruise ship.

The Metcalfe family took a vacation together aboard the Carnival Freedom this year with family. One of Debi and Harold’s favorite places onboard a ship is sitting at a piano bar. They found the piano bar and enjoyed listening to the music and singing along with the songs played by the piano man, Dave Filsinger.

Dave says, "I met Deb and Harold onboard the Carnival Freedom during May in the piano bar where I play the piano every night.  I found Deb and Harold to be warm genuine people and after meeting them, heard their story about their stolen horse and their determination to right this tragedy.

"Their successful resolution - it took over a year, as I recall - from the grounds of such a serious and heart-wrenching trauma, came the positive result of Deb and Harold starting a non-profit organization for the rescue of finding and returning stolen horses.   I told her I had two relatives who owned horses and were very involved in riding, barrel jumping, rodeos, etc. "

The piano man, Dave Filsinger, was persuasive in encouraging the audience to join him. On the second night, Debi grabbed her courage, and the microphone, to sing the duet Paradise by the Dashboard Lights with Dave, something they both lived to regret. It was such a long song!

"As per the norm, I ask the guests to sing on an extra mic up by the piano, and Deb sang.  Regardless of what she may tell you, she did a very good job singing a tune she had requested.  We had a great week with Harold and Deb and several other guests singing and making music,", Dave adds.

Talking and laughing afterward, Dave, asked the Metcalfe's what they did for work. Debi and Harold happily shared the good works of Stolen Horse International-Netposse, Missing and Stolen Equine with him and told the story of how thousands of people helped them find Idaho, and are helping find other people's horses through the nonprofit organization now.

Dave mentioned that some in his family have horses, but he didn’t know much about them. Hold that thought for a moment.

Throughout the cruise, Debi and Harold continued to enjoy the piano bar and their new friend, Dave, who introduced them each night as returning heroes for the work they do to return stolen and missing horses to their owners. Although the attention made them personally a bit red-faced, they were pleased to increase awareness for the work done by the nonprofit organization.

Even though it wasn’t a Disney Cruise, It’s a Small World may have been a more fitting song.

Dave continues, "The "small world" concept was brought home by the fact that my relatives did know Deb and Harold as they have a horse stolen and had contacted their organization.  The loss of their horse is so much more than just finances, as it is personal and such a meaningful part of their lives."

Shortly after their vacation ended, Debi received a note from Susan Frink, the owner of the missing mare Star of Taffy. Dave remembered Debi and Harold after the cruise was over and shared his story of meeting them with his family in Nebraska. As luck has it, Susan is was the piano man's sister! What a small world after all?

One final thought from Dave. "How wonderful that literally thousands of miles away from Nebraska and North Carolina in the Caribbean, people meet by "chance', and yet it is almost as if there is a divine plan for people to meet and help each other. I thank God for people such as Deb and Harold who have taken a horrible incident in their lives and turned it around, trying to assist others who face the same plight."

At Stolen Horse International, rest assured that a case never closes until the horse is found, returned, or sadly, reported deceased. The case is still open for Star of Taffy.  Let’s bring her home.

And, remember to tip the piano man (or woman) when you are on your next cruise. You never know where the experience in the piano bar may take you.

Post Note from Susan Frink: "The Stolen horse and Cruise ship article was very well put--cute and will get some curiosity I think.  Very well written.  I loved the photo.  Dave looks great and you can tell he enjoys the work he is doing and meeting people.  I am happy that you got to know Dave and it is a VERY small world!!!" 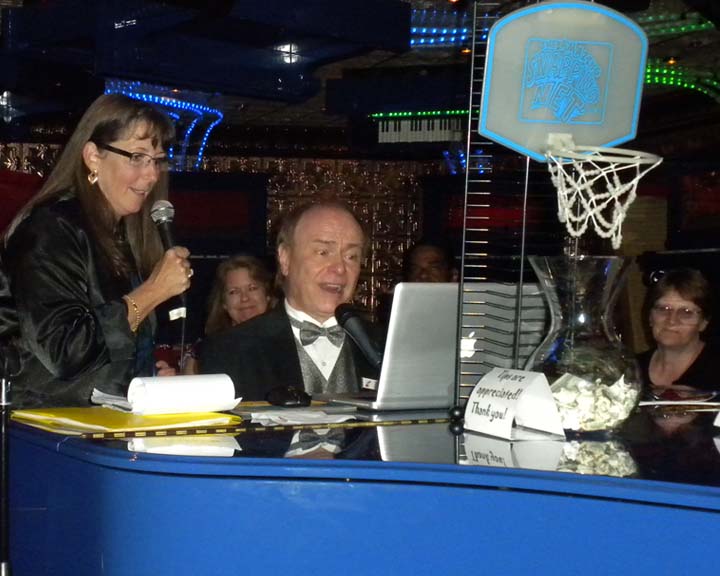 It’s a small world’ was really brought home by the fact that my relatives Susan and Brad Frink already know Debi and Harold, as they contacted the organization about their stolen horse. I thank God for people such as Debi and Harold, who have taken a horrible incident in their lives and turned it around, trying to assist others who face the same plight.” - The Piano Man, Dave Filsinger

Paradise by the Dashboard Lights is the song that Dave and Debi are singing together above.

Meet Star of Taffy and help the Frink family bring her
home. We never give up until we know they are safe
or have passed on. Don't forget to tell your friends. Click on the buttons on this page to share to multiple social media platforms. Remember, Share!

Click here to send a note to Susan. A few words of support mean more know to a victim. 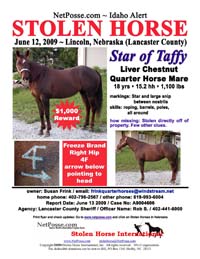 Click here to Donate to Stolen Horse International and help us continue our victim's services and educational outreach programs.
Stolen Horse International provides news and other resources for free on this website. As a charitable organization we survive on the kindness of people like you. Please consider donating to help fund the organization or purchasing a NetPosse ID for your horse, dog or cat to help protect your beloved animals!
Donate  Buy NetPosse ID

NetPosse Fun Facts: Paradise by the Dashboard Lights and Meatloaf

Hunt on for beloved horse Maverick, missing from Dandenong North