Almost 8 years ago, Kayla Pevytoe, 26, of Magnolia, Texas, experienced the loss of her horse, Dixie. Her mother passed away in 2008 and Dixie helped her get through that tragic time.

Sadly, after an unfortunate, turn of events, Dixie was sold without her knowledge. Pevytoe has been looking for her childhood heart horse since April of 2013.

Pevytoe states, “She saved my life in more ways than can be counted and we had a bond that was indescribable!”

Once Pevytoe discovered that Dixie was gone, she started her quest to find her. Throughout the years she posted on Facebook, searched various Facebook groups, searched equine sale sites, etc. She had very little information and had no luck finding her.

On January 11th, 2021, she made a post on Facebook and prayed that this would be the time she found her girl.

Several people on Facebook immediately recommended that she contact NetPosse, also known as Stolen Horse International.  Pevytoe had never heard of NetPosse at that time so she was hesitant to contact the nonprofit organization.

Time went by and no leads emerged. Pevytoe finally filed a “Searching for Horse” report on Stolen Horse International’s website, www.netposse.com. After the report was received, the site generated her automatic flyer. Volunteers with Stolen Horse International issued their NetPosse Alert, the horse industry ‘Amber’ alert, to social media platforms, network partners, and in their NetPosse News e-newsletter.

Luck was with Pevytoe this time. A former owner informed her that he sold Dixie to another family six months before he saw the alert. Pevytoe finally had a lead!

Pevytoe was heartbroken, shattered with the news she heard next.

“I was told by someone who had seen Dixie at one time that her condition was so severe that she may not even still be alive. I couldn’t have been more devastated,” Pevytoe says. “I prayed that wherever Dixie was that she would be out of the neglectful owner’s possession and in the hands of someone who loved and cared for her.”

Pevytoe runs an equine rescue inspired by her experience, Spirit of Dixie Horse Hayven, and she knew that anyone could have gotten Dixie, even a kill buyer.

"I was terrified and felt like I’d never see Dixie again and feared the worst. All I could do was update my post with this new info and pray for a miracle!"

“Two days after making my report I received a phone call from a lady stating she saw the NetPosse Alert on Facebook and that she thought Dixie was bought at a horse auction by some friends of hers,” Pevytoe recalled. “She saw the NetPosse flyer and recognized Dixie.”

She continues, “The family who had her decided to reach out to me and it was confirmed that they had Dixie! We came up with an agreed price and a time to meet and on Saturday, January 23rd, 2021 my husband, Ricky, drove eight hours and forty-five minutes (one way) to pick her up! I was in complete shock and overwhelmed with joy!”

According to Pevytoe, Dixie, at the very least, had six confirmed moves in almost 8 years!

When her husband, Ricky got Dixie out of the trailer she was not the same Dixie she remembered.

“She had been through so much in that amount of time. I didn’t think she would remember me,” Pevytoe said. “She seemed so dull, like she didn’t care what was going on around her. The other horses were neighing at her and she didn’t even look in their direction. My emotions were so mixed! I was so happy to see that my girl was still alive but I was horrified by her appearance. She was extremely underweight and looked awful.”

Pevytoe called Dixie’s name a couple of times, rubbed her forehead and then all of a sudden her ears perked up and she suddenly took a step towards her former owner.

“Dixie rubbed her head on me like she always used to do!!! She remembered me and I busted into tears! Our reunion was the most amazing thing I have ever experienced. Saying that having Dixie back with me is a dream come true would be an understatement!”

Later when talking to Debi Metcalfe, the founder of Stolen Horse International, Debi asked Pevytoe, “Is it safe to say that our flyer was used to help find Dixie?”

Pevytoe responded with, “Absolutely! I didn’t post my number on any Facebook posts but it was on the NetPosse flyer so if it wasn’t for y’all I’m not even sure I’d have Dixie!”

“There truly are no words to even begin to describe how I feel!”, Pevytoe said. “The odds were extremely against me but God truly is a way maker and a miracle worker. I will spend the rest of my life thanking and praising him for this extraordinary blessing!”

She continues, “I’m so thankful for everyone who helped me and supported me in my search for my girl! My appreciation for everyone is infinite!” 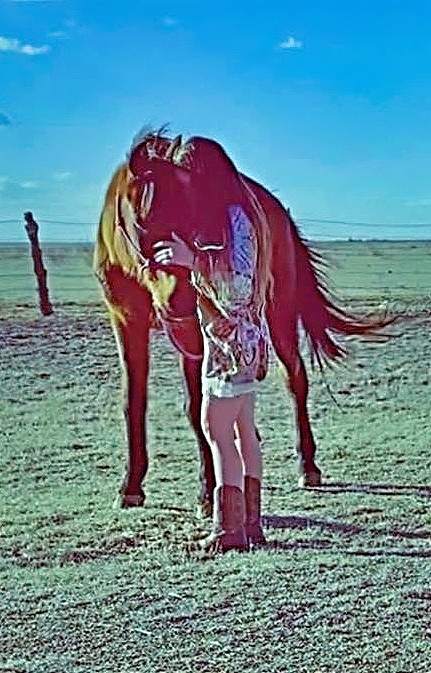 Dixie is home again with Kayla. 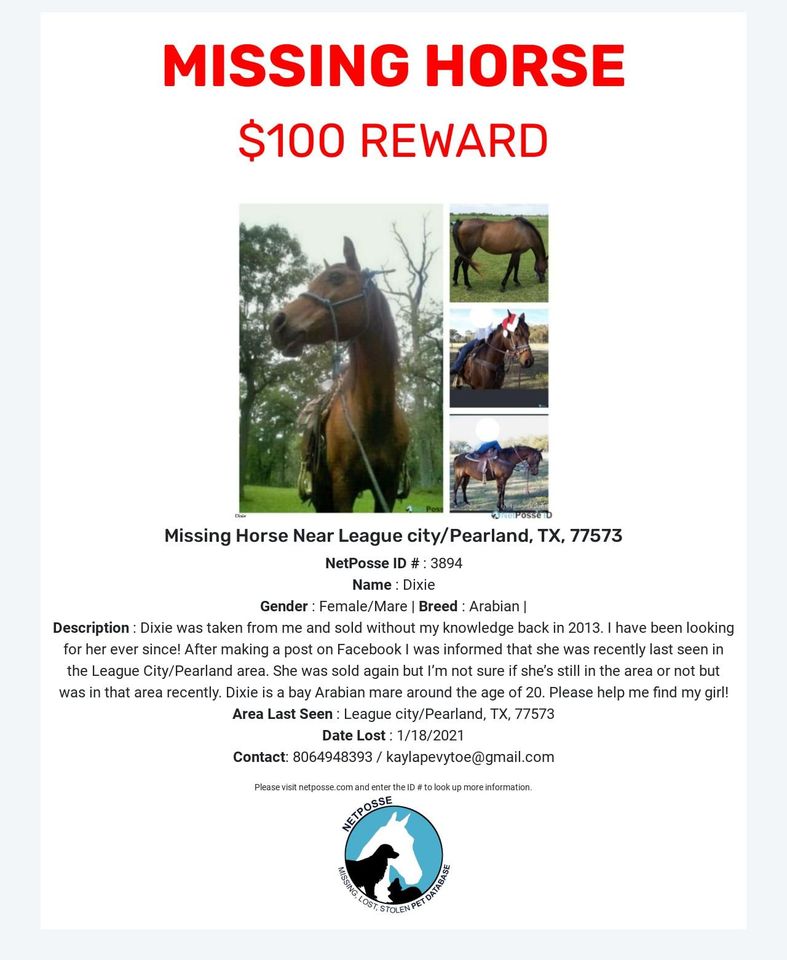