Stolen Rossendale pony dumped at side of busy road in UK

Stolen Rossendale pony dumped at side of busy road in UK 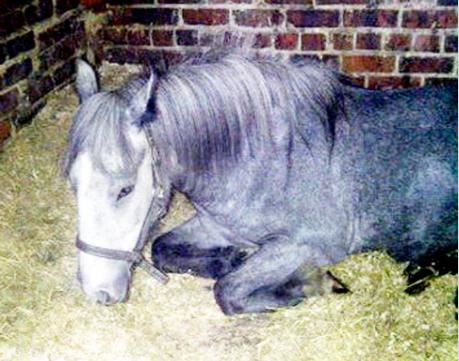 A stolen pony is set to be reunited with its owner after it was found dumped at the side of a busy road 35 miles away in Riverton, of the United Kingdom this week. The horse was stolen between 4.30pm and 8pm on Monday, from a farm with one gate , and was found at around 2pm on Wednesday.

Shadow, a three-year old 14-hand grey pony, was found on a very busy highway in less than two day after he was stolen from a farm in Stacksteads.

According to the Lancashire Telegraph News , the family was sick with worry and described the time  while Shadow was missing as a nightmare and devastating.  A ten-year-old child in the family who rides the horse was very upset.

Claire Swift, a grandmother-of-six from Newchurch, said she was ‘sick with worry’ after finding out Shadow had gone missing.

The family will be moving Shadow to a more secure farm after this nightmare.

This story should help you understand that every "found estray" horse has a story. It is not always about the recession and being dumped because of hard times. Sometimes they just get out or have help getting there.

If you like the articles we bring to you, please help us continue by donating today!

Sign up to get our NetPosse Alerts, NetPosse News and Announcements

Microchip Kits and Freeze Brands are available in the NetPosse Store.

Letter to Supporters: We need your help! Vote! Like Us!

The Power of One

What Makes A NetPosse?