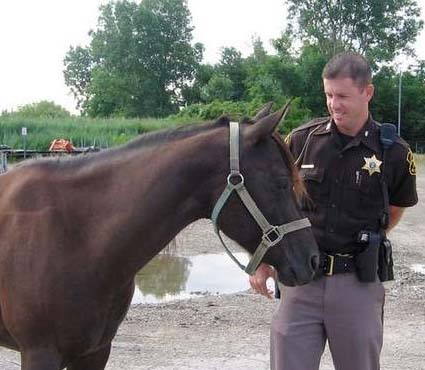 NetPosse.com has assisted in finding  the owner for this beautiful Bay horse. Thank you to everyone who posted our NetPosse.com Alert on facebook!

St. Clair County Sheriff Deputy Scott Baldwin said they have located the owner of a horse caught running in roadways in Port Huron Township and Port Huron this morning.

Baldwin said through tips on a Facebook post, they discovered the mare came from a farm on Michigan Road near Interstate 94.

The horse was reported near Dove and Michigan roads in the township about 5:30 a.m. and was caught near Rivertown Green Apartments in the city.

Baldwin said a resident who is familiar with horses caught the mare and walked her to the AT&T complex near 21st and Bancroft streets where she was kept in a fenced in area.

The owner is making arrangements to trailer her home.

NetPosse.com would like to assist in find thing the owner for this beautiful Bay horse. If you know anyone who may have lost a horse in this area please tell them about this horse

Officials tracked down a horse running through Port Huron Township and Port Huron this morning.

Baldwin said the horse was in good condition and they are looking for its owner.