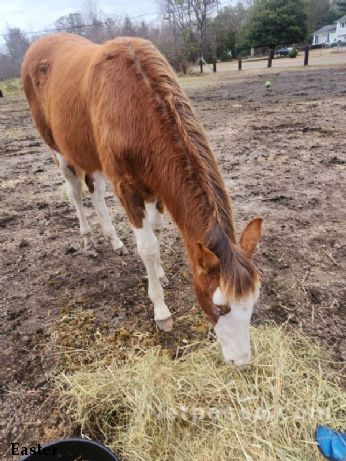 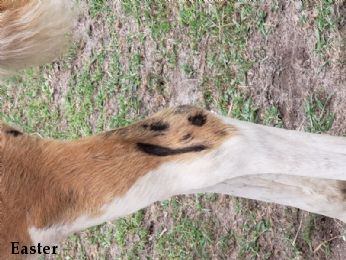 Searching For Horse Near Woodbine, NJ, 08270

SEARCHING, have you seen me?
Name: Easter
Gender: Filly
Species: Horse
Breed: Dutch warmblood
Description: My horse is named Easter and resided at 320 steelmantown rd woodbine nj 08270 with her parents Lillie and King. Bouche' (not blood related)also lived there. Lillie have birth to Easter on 4/16/22 around 2:30-3:00 am all alone. My neighbor called the owner of Lillie to let them know Lillie had given birth and was met with this reply " Really? We didn't even know she was pregnant " ! At that time I used to just go by and talk to the horses and pet them. Skip forward to Mother's day 2022 I look outside and see King bouche' and Geronimo ( said owners boyfriend daughters horse) running down the street so I ran out and gathered them up and put them all back in their pasture by the owners showed up. They thanked me and left. The next three days the horses kept escaping and I kept returning them to their pasture. The owner of the horses asked me if I wanted to take care of them since I lived only down the street and she lived about 15 minutes away so of course I said sure. In the coming weeks I had to call several times for them to bring hay and grain out so I could feed their horses. By June I had become so close with Easter she would lay on the ground next to me and put her head on my lap while I sang to her... she would fall asleep on me. The owner of Easter and her bf borrowed 10,000.00 from me for closing costs on their home or they were going to lose it. Between the two they had 6 children only 1 between them... So she gave me Easter as a thank you( verbally) and said they will repay me with the next 2 months. After a few months I asked when they were going to start repaying and was told I gave them that money for the horse!!! All hell broke out. They lost the house and for the three next 2 months would not allow me to go near Easter because she had only verbally given me Easter. Easter got her left eye cut open and they did nothing( I still went to see Easter everyday) I recorded the neglect called the aspca etc nothing was done! September 9 2022 the horses escaped again so I helped her get them back in the pasture. She said she was pregnant and living in the tack shed because they lost their house and she had nowhere to go so I took her into my home and tried to help her out with what ever I could. For the next 5 months she lived in my home with my children and myself completely free. We all tried to make her comfortable because she was pregnant gave her clothing etc. During the first week she was living with me she offered me the bill of sale for Easter because she said she wanted to make things right. When I realized she was doing drugs and asked her about it she walked out of my home on 1/2/23. I was not mean, we didn't not argue or fight or anything... she just walked out. On 1/5/23 all her horses were gone including mine!! She was nowhere to be found! Thank GOD I put up the trail cam across the street which caught the name on the truck that had taken them! 4:45 pm on 1/5/23 I called the AUCTION and was met with a very hostile person telling me Easter now belongs to her and unless I'm going to buy her back she doesn't want to be bothered by me. She wants $2500.00 from me for my horse or she is going to sell her. I filed police reports with the pd in both twps. The police departments are making me file this in civil court. Both police departments will not allow me to file charges for stolen property on the auction person but both police departments said they told the auction person she can't sell Easter. I have the bill of sale for Easter. It's dated 9/1122 . I just found out she tried back in October to sell the horse to this auction but her boyfriend stepped in because they were also trying to take his daughters horse!
Area Last Seen: Woodbine, NJ, 08270
Date Last Known: 1/12/2023
Contact 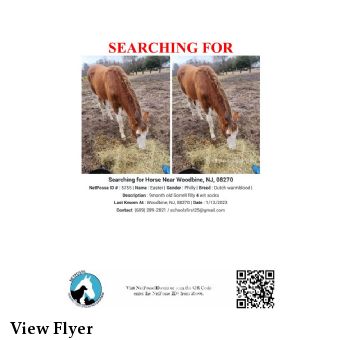 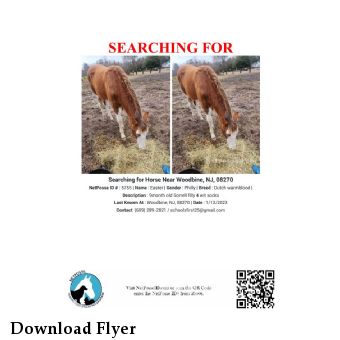 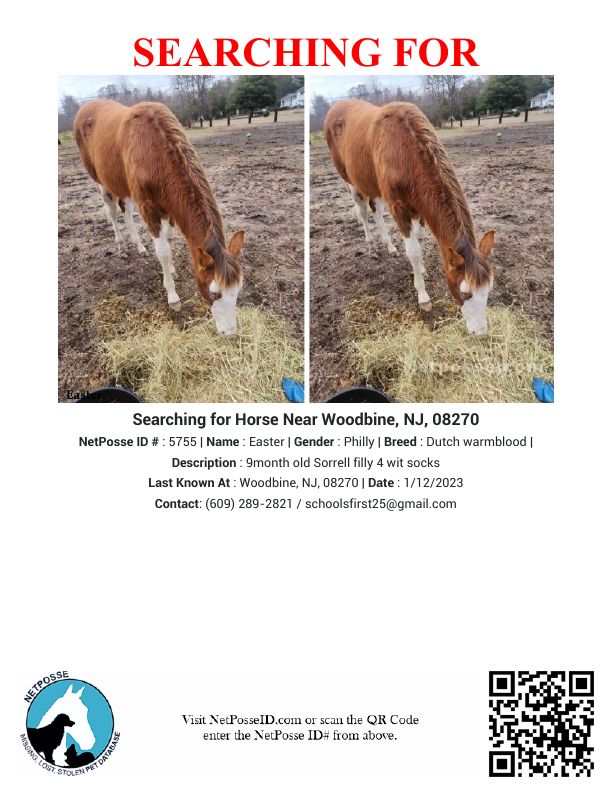