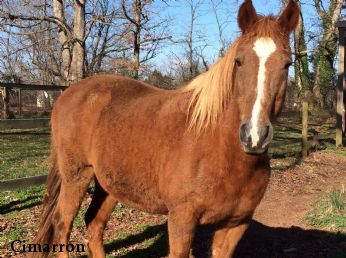 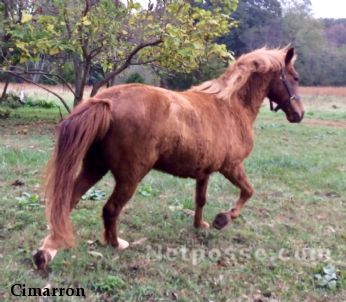 SEARCHING, have you seen me?
Name: Cimarron
Gender: Gelding
Species: Horse
Breed: Peruvian Paso
Description: I put out ads to free lease my horse Cimarron in October 2017 and a woman really wanted him. All of the initial references she had given me said they’d never heard of her, but I was finally able to get a hold of someone who gave her a glowing review. She had a very nice farm that she owned and he was to live out his life there unless there was any problem. If so he was to be returned to me! I tried calling her to check on him shortly after she came to get him, But she wouldn’t answer the phone and in some cases told me to stop calling her and hung up. I drove out to her farm to check on him, but he wasn’t there. I was told he had been moved to her father’s farm in West Virginia. This was not the agreement and I was very worried. I finally put out a Facebook post looking for my horse and immediately received a reply. She informed me that my horse had died a day or two prior. She said he had been standing under an apple tree and was hit by lightning. After a week of trying to get a hold of her father’s farm, he finally answered the phone and told me that my horse did not get hit by lightning. He said he walked out to the horse field one day and just found the horse dead so he buried him. Then he hung up on me! I didn’t really believe him at this point so I am trying to find him. I still hold Cimmy’s registration papers and am his owner. She has blocked me on her Facebook account and blocked me from calling her phone. I would like to add that Cimmy has Equine Cushing’s Syndrome and had to take Pergolide daily. It is by prescription only and should have been prescribed by a veterinarian in Raphine, VA and Elkins, WV after that.
Area Last Seen: Elkins, VA, 26241
Date Last Known: 8/12/2018
Contact
IMPORTED FROM OLD WEBSITE 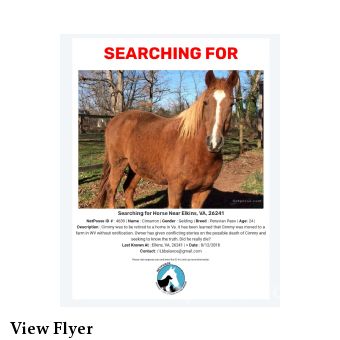 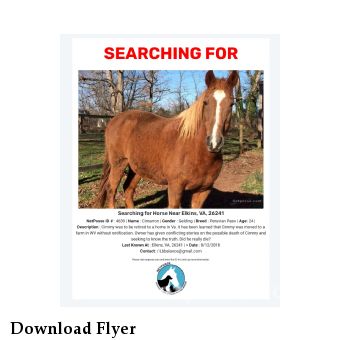 There are no attachments to this entry.