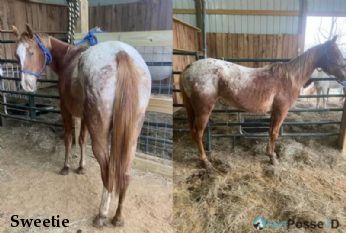 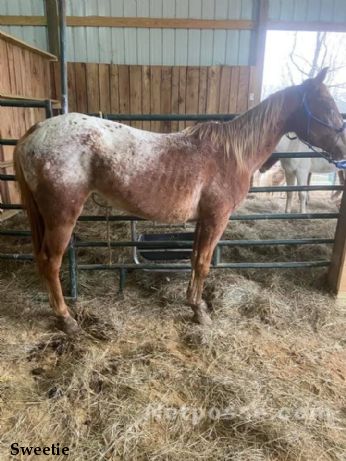 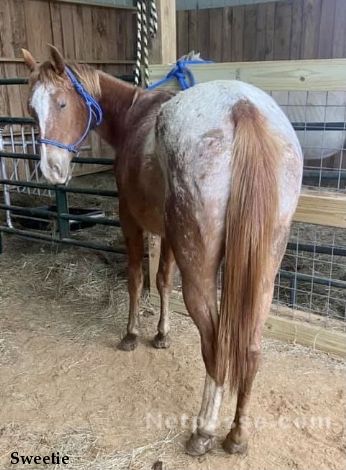 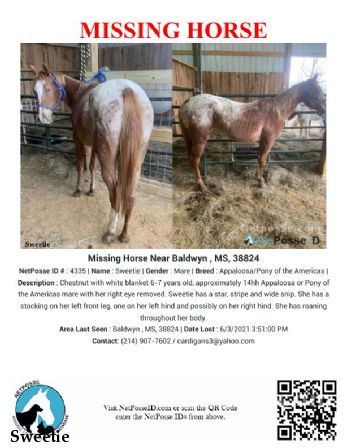 MISSING, have you seen me?
Name: Sweetie
Gender: Mare
Species: Horse
Breed: Appaloosa/Pony of the Americas
Description: On approximately February 6, 2021 I saw an Appaloosa mare named ‘Sweetie’ with a severe eye injury listed for sale on Facebook, the mare was in a ‘kill pen’ in MS. I contacted the poster about the mare and on February 11, 2021 I sent $600 via Venmo to buy the horse. I live in SC so I made arrangements for Sweetie to be trailered to an animal hospital in Baldwyn MS to have the eye treated. Sweetie arrived at the vet clinic on February 13, 2021. She was boarded at the vet clinic until March 16, 2021 when surgery was performed to remove the eye. On or about March 25, 2021 the vet cleared Sweetie to be trailered to me in SC. I asked the agent for the kill buyer where I could board Sweetie until the hauler could pick her up and I was told she could stay said animal hospital. I already had a hauler lined up and on March 25 he told me that he’d trailer Sweetie to me “the end of next week”. Then on April 21, 2021 this hauler says he can trailer Sweetie to me “in one week”. After several empty promises to bring my horse to me I gave up and hired a different hauler. On May 4, 2021 the new hauler arrived at the animal hospital to pick Sweetie up only to be told that she was not there. Evidently they needed to run my horse had been boarding in and they asked the kill buyer agent to move Sweetie. NOTE I was never contacted by anyone about my horse needing to be moved and I had no idea she had been moved. I immediately contacted the agent and asked where my horse was. First she said “I don’t know”, then when I pressed her I was told “the hauler has her”, referring to the first person I hired who gave me the run around. I contacted the hauler and was told that he had picked my horse up at the vets and taken her to the agents property. When I went back to the agent and asked AGAIN where my horse was, that I was told SHE had my horse, and she never responded. I have asked the agent for a physical address of where Sweetie is and she has never responded. I want to know where my horse is!
Area Last Seen: Baldwyn , MS, 38824
Date Lost: 6/3/2021 3:51:00 PM
Contact 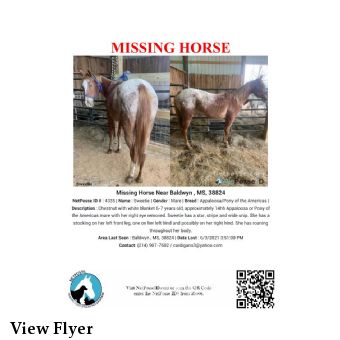 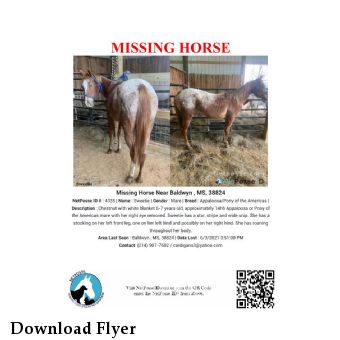 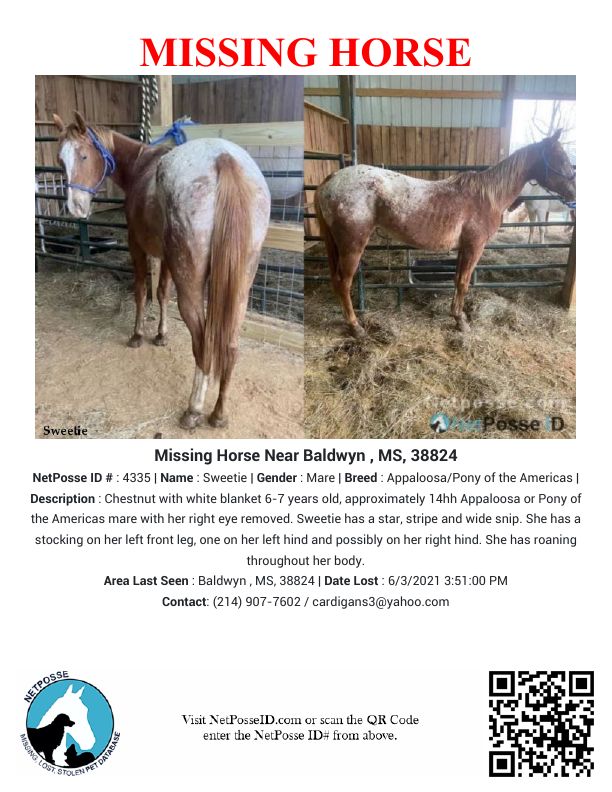