On March 25, 2016, Dakota & Hawk were sent to a trainer in Manitou Beach, MI to work on some issues. Their owner, Carrie Schotte, found out that within days of the trainer having Hawk and Dakota he took them to Shipshewana Auction in Indiana and sold them without a bill of sale. The trainer put them in an 18 year old girls name to cover his tracks. Dakota was bought by a horse trader from Kentucky, and believed to have been shipped East (possibly New Jersey). Since he had been purchased at the auction in IN, he then had a bill of sale that accompanied him from auction to auction.

The search began for both Dakota & Hawk. Hawk was located but Dakota was still missing.

Carried reported Dakota missing to NetPosse™ on August 26, 2016 and we immediately began sharing the alerts nationwide in an effort to locate him.

On September 10, 2016, a tip came in that lead us to believe he had been sold through the Cranbury Auction in New Jersey. Contact was made with the auction house but we were not able to confirm who had purchased Dakota. Many phone calls were made and the Kill Buyer who had purchased him in Kentucky told us he had shipped Dakota to New Jersey and sold him at the Cranbury Auction.

Dakota has been found and he has a job in Mounted Patrol!

Carrie was able to work out the logistics with the legal department at the law enforcement division. She decided to donate him to the mounted patrol unit with the agreement that he would be returned to her at his retirement. Carrie receives frequent updates on how Dakota is doing along with lots of photos. She has not been able to get out to visit him yet, but our report manager, Pam Miller, and her daughter went by to see him while they were on vacation in New York City so they could report back to Carrie and send her lots of photos of their visit with Dakota.

Langston (aka Dakota) reporting for duty!

Here is the rest of the story by Pam Miller:

I have maintained contact with both Carrie and the officer that is caring for Dakota aka Langston since he was located last year. My daughter and I have always wanted to go on a trip to New York City together. This was  the perfect opportunity to be able to go see Langston. We were so excited to get to go on this trip and I was even more excited to get to finally meet Langston and send an update to Carrie on how he was doing.

Langston is down there somewhere!

After making arrangements ahead of time with the Sargent at the barn, On June 30, 2017, my daughter, Kristina, and I went to the park and recreation barn and was able to see Langston and visit with him and the officers that care and patrol with him. Everyone there was so kind. You could see the love in their eyes for Langston as they talked about him and handled him. Langston has made friends with everyone! He is doing great! He is the smallest horse of the team but the mightiest of them all! Dakota is very healthy and happy! The visit was filled with lots of hugs and kisses for Langston, as well as laughter, goosebumps and tears as the story of how he ended up in their care. I can't thank everyone in the patrol unit enough for allowing us the time there! We made friends for life and maybe one day we will get to come back to visit! And if your ever in South Carolina, give me a call! We would love to show you our town!

I for one can tell you that Langston is so very lucky! Having been sold to a kill buyer, he could have easily been shipped to slaughter. But luckily the man that purchased him in New Jersey knew that he would be perfect for the mounted patrol unit! And then for him to see our alert and notify the unit immediately, is well I just can't describe it in words. I get goosebumps thinking about it every time. From the bottom of my heart, I thank you, sir, for doing the right thing and alerting them about Langston. I wish I could thank you in person!

So the moral to this story, please share those alerts and if you think you see a horse that might possibly be a match, let us know! You never know where the horses will end up and who knows, they might be lucky enough to serve and protect like Langston!

Thank you, Sargent Cowan, for taking time out of your day to show Kristina & I around the barn. We can't tell you enough how much that meant to us both and all of the volunteers at NetPosse™! 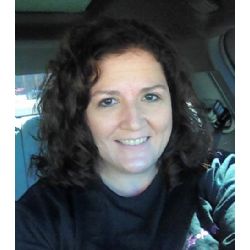